Bill.com (BILL) a name we featured in a write-up back on May 19th highlighting some near-term positioning as well as a focus on August expiration. BILL has been one of the most consistently strong names since that post and August $150 calls still have 4000 in open interest and the $175 calls have more than 3000. The spreads bought back the upper strike to let it run more and are sitting on 300%+ gains. BILL shares have climbed to above $205 from $137 at the time of that write-up, a massive move.

This was the write-up:

“Bill.com (BILL) seeing bullish positioning since the start of May and following some overall weakness across the Software sector. BILL has seen 3000 May $145 calls bought to open, 14,250 May $120 puts sold to open, and more recently a focus in August expiration with 2000 of the $150/$180 call spreads bought and 1500 of the $155 calls bought. BILL shares are basing just above YTD lower value which aligns with its rising 200-day moving average so the risk/reward setting up favorably. BILL remains in a longer-term uptrend and above $153.50 can make a run to $165 or higher. BILL is a disruptive name for small businesses as their platform replaces paper invoices and checks for things like billing to vendors and getting paid for services. BILL has been rapidly expanding their network integrating with Quickbooks for greater SMB adoption and expanding partnerships with larger institutions like Chase. BILL sees massive opportunity in B2B payment flows and has launched a wide range of functionality in the last couple years including cross-border payments, virtual card payments, same-day ACH, and now testing real-time payments through The Clearing House. The $11B software company now trades 33.6X FY22 EV/Sales with revenues rising 45.5% in 2020, 40.5% in 2021 and seen rising 32.6% in 2022, a hyper-growth name but valuation remains very rich. BILL recently announces a $2.5B deal to acquire Divvy, a leader in spend management that modernizes finance for business by combining expense management software and smart corporate cards into a single platform. BILL is coming off a strong quarter with acceleration in TPV growth to 45% and a rise in its take rate. The take rate expansion was driven by continued mix shift towards variable priced payment options – cross-border and virtual card – due to BILL’s supplier-enablement efforts. The real time payments product is still in beta, but an integration with Stripe will be generally available this quarter, which should allow BILL to expand the reach of the instant transfer product to all 2.5mn of its network members. BILL added 6,400 net new customers during the quarter compared to 5,600 in the prior quarter.  Analysts have an average target of $175 on shares and short interest at 9% of the float has risen 35% Q/Q. Piper raised its target to $180 after the strong quarter, while SIG and Berenberg each initiated last quarter at Neutral on valuation. Hedge Fund ownership fell 11% in the latest quarter filings, Whale Rock, Temasek, Abdiel and Lone Pine notable concentrated holders and Melvin with a new position may be the buyer of these call options.” 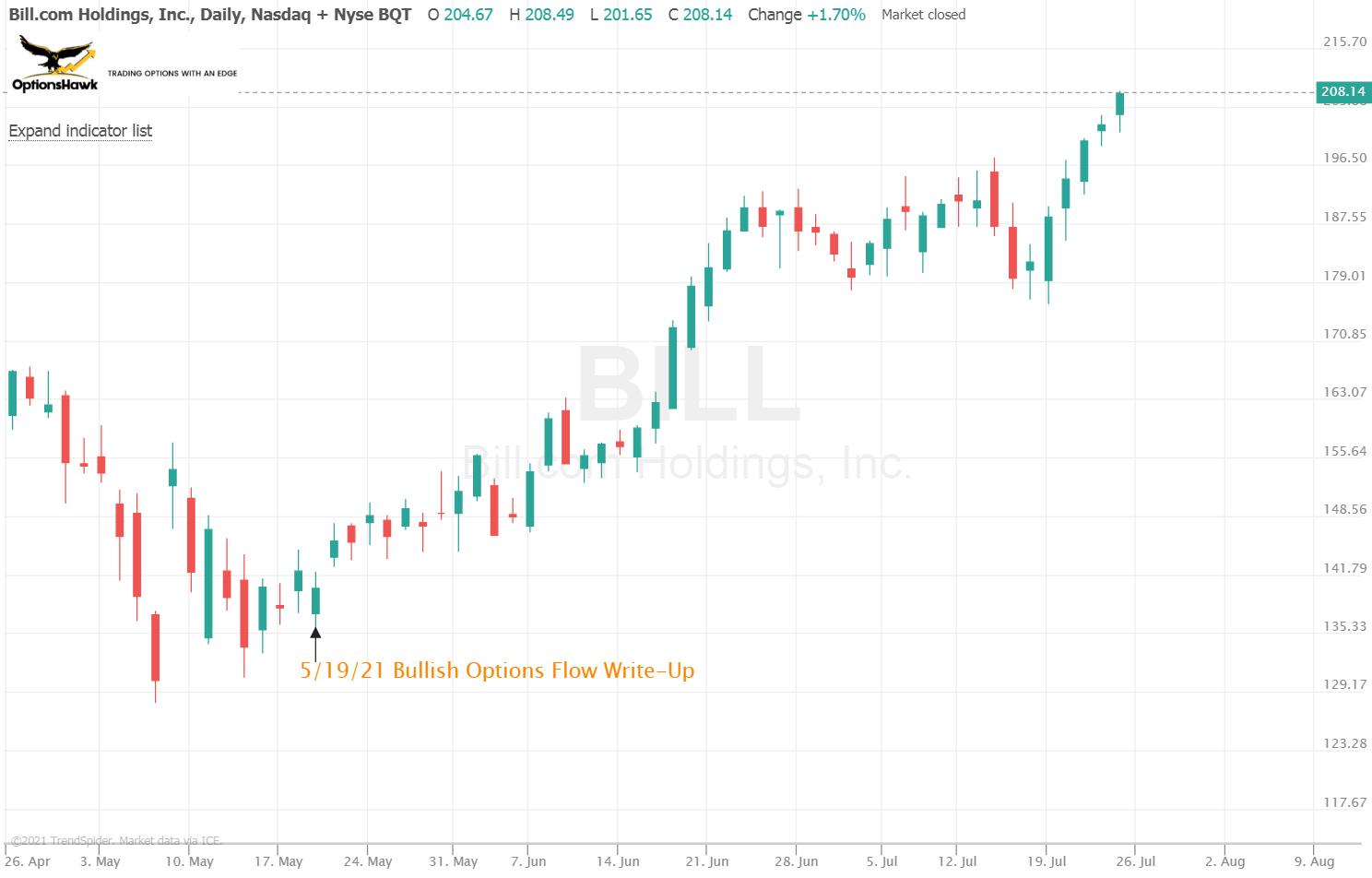