Croc’s (CROX) shares are surging 10% this morning after posting a strong quarterly report and raised forecast and now at record highs. CROX has been seeing large call buys since mid-February position in May and June along with some risk reversals that also sold the downside puts.

A view from the Hawk Database:

“Croc’s (CROX) with 1,650 June $80 calls being bought today from $11.20 to $11.40 and also seeing 1200 of the $100 calls bought for $4.40 to open, notable positioning in a retailer that has shown relative strength since last year’s March low. CROX has seen little other notable open interest. Shares are just below recent highs and re-testing the early February breakout today at $77.50 with a continuation higher targeting $83. The $5.33B company trades 22.8X earnings, 4.3X sales, and 43X cash with 21% revenue growth in FY21. CROX is guiding to almost $4/share in earnings power in FY22, up from $2.50 this year as well. CROX took a very proactive approach to their business at the start of the pandemic reducing inventories, investing in more digital channels, and engaging more with e-tail partners like Amazon and Zappos. The result put them in a much stronger position throughout the year and both Black Friday and Cyber Monday were solid continuations of the trend with better ASP and conversion despite lower overall traffic. CROX was at the Keybanc Softlines conference in December and laid out some priorities for 2021 including expanding their sandals lineup, more personalization, and product enhancements like their LiteRide clog and molded Pacer shoes.  Analysts have an average target for shares of $82 with a Street High $91 at MCH. Piper with an interesting note on 1/29 highlighting their Jibbitz business which is charms for their shoes that allows people to make their Crocs more personal and customizable. The firm thinks the Jibbitz business alone is worth $16/share as it becomes about 10% of the mix in 2023 and they continue to test higher prices and new customizing stations in store which will drive basket gains and increase in-store time. Short interest is 3.4% and near the lowest level in six years. Hedge fund ownership fell 22% in Q4. “

We also stay on top of these top open interest plays and look for optimal set-ups, in a post on 4-1 we wrote:

“Croc’s (CROX) shares setting up for a bull wedge breakout above $80.50 after pulling back to the 10-week MA and holding up well. CROX is near new highs and a breakout above $83.50 has room to run to $95+ with both MACD and RSI reset and still in healthy trends. CROX has 3,000 June $80 calls in open interest from size buyers in February.” 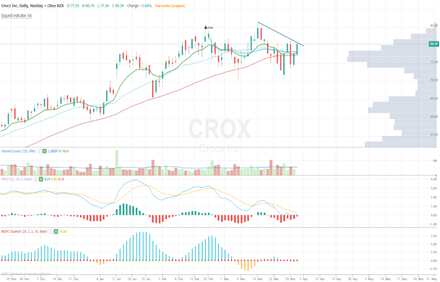 There is no greater signal in markets than options flow, and when combined with fundamental and technical research it gives traders a major edge.