Market internals help us understand insights into the market’s breadth or its true energy “underneath the hood” of the market. With so many stocks and sectors moving on a daily basis, as a shorter term trader it’s important to see what the broad market is doing on any certain day regardless of what the index averages say. The S&P might be down on the day but if internals are at highs of the day that might be a clue that the downside in the market is about to end. If just one sector is driving an intraday move higher while the majority of stocks are down based on decliners outpacing advancers it may be a red flag the market is about to turn and make its true move lower.

There are several ways to look at internals but I will go over how I interpret the main ones I track on a daily basis and why they are so useful.

$TICK is the symbol for most platforms to pull up a NYSE TICK chart. It shows a measurement of the collective buying and selling pressure of all NYSE stocks. It will give you the most accurate mood of the market immediately as it summarizes the number of stocks that are upticking in price versus the number of stocks that are downticking in price from the previous quote. This is a constantly updating reading each second so there is a lot of noise to it. The key thing to focus on with the TICK is where it is spending most of its time and if there is a trend for that day. Generally the TICK spends the majority of its time between -600 and +600 with those readings being mostly useless until we look at the Cumulative TICK as I will touch on shortly. When the TICKs are quiet and in the middle of the range that shows a market with no conviction. Once there are any readings above +800 or below -800 that shows real buying or selling pressure. When you see +1000 or higher that’s an extreme TICK reading showing a solid buy program entering the market. Many of these times show short term exhaustion and on a choppy or trendless day, an extreme TICK reading can mark the high or low of the day. However, if I notice multiple extreme readings within the same half hour, that’s an indication of real buying or selling pressure that is likely to continue in that direction. This is especially powerful information on the first day of a new trend move up or down as it may indicate the majority of traders are trapped and the market is moving against them which can extend a move further than most believe.

I like to use a 5 minute chart with the TICK indicator but any intraday time frame under 15 minutes works fine. It’s not needed but I throw on a 20 period EMA to smooth out the trend of the TICKs as well since it’s the trend we care about most. I also like to set up audio alerts in Thinkorswim that let me know when a key level like +1000 is breached so I don’t need to stare at this all day. You can see from the chart below how often it stays in range. The intraday range highly depends on the current market volatility. If the market is quiet overall, there will be much fewer extreme TICK readings throughout the week and vice versa. 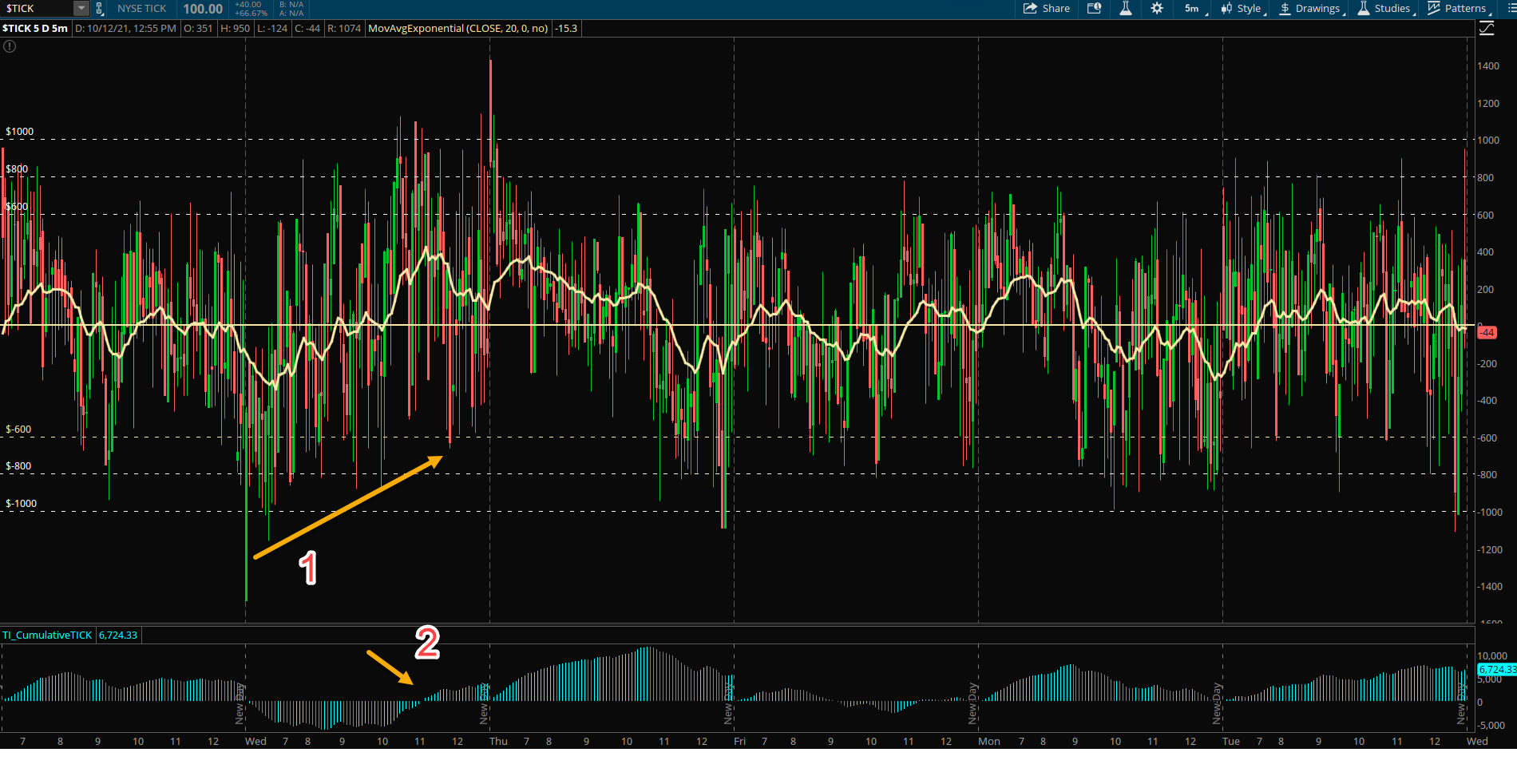 What about the Cumulative TICK?

The histogram indicator that plots at the bottom of the above chart is the Cumulative TICK. This is simply a cumulative tally of each closing bar intraday. So if two straight 5 minute bars close at a value of +500 then those two bars are added together and the Cumulative TICK prints +1000 as its current accumulated value. This is the best way I have learned to aggregate all the TICK data each day into a trending signal for what the market is really attempting to do. One of the best ways to read the opening hour and understand the potential for a trending versus choppy day is to see where the TICK spent the majority of its time in the first 30 minutes of the day and first full hour. As shown below on the day of 9/20/21, the TICK spent a large amount of time below zero in the first hour. In fact almost the whole first hour of the trading day was below zero. When the Cumulative TICK is making steady lower lows like this as it struggles to get any actual readings above zero, you can be sure the S&P 500 is in for a rough day. On this day the SPY opened around 435 and dropped down to 429 in the first half of the day before recovering. 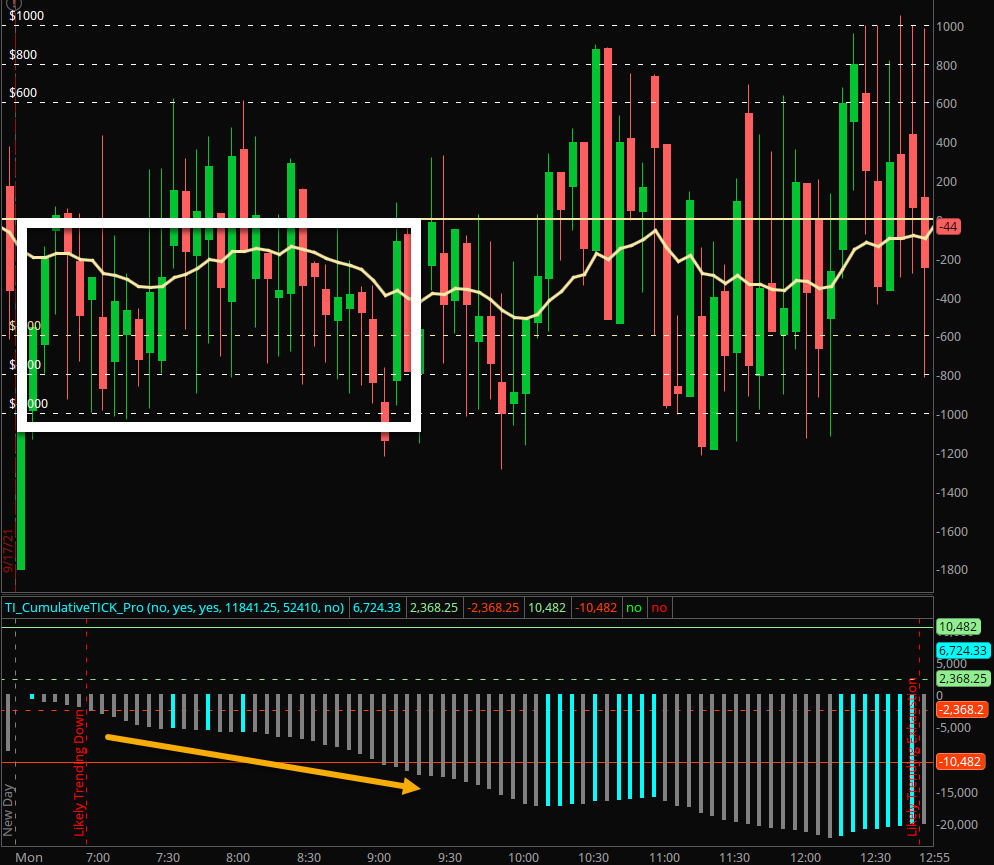 The breadth of the market is best measured using the Advance Decline ratio or the $ADD symbol in most trading platforms. This simply is the difference between advancing and declining stocks on that day. The main use of this is to gauge overall stock market strength or weakness. Since the S&P 500 is a market cap weighted index it can mask a lot of things that the advance/decline ratio will show us. The NYSE might have several thousand stocks total but if Apple or Google are up on the day with their large weighting in the index it can skew the S&P to be up when the majority of stocks could actually be lower on the day. The $ADD measures and confirms the positive or negative action in the market. If there is a divergence between the market indexes and the AD ratio it can be a warning that breadth is not supporting the move in the broad market and eventually like an engine trying to drive uphill without enough gas in the tank, it will stop. 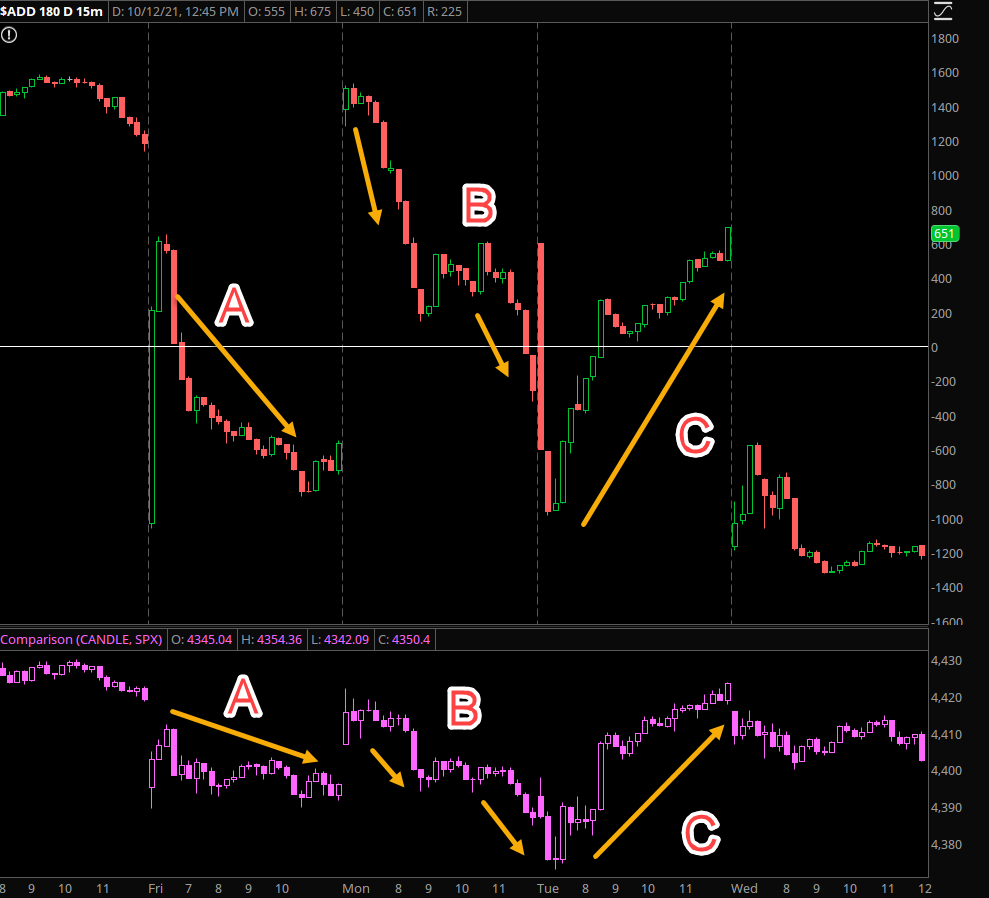 Much like the $ADD, the NYSE Up/Down Volume ratio, or $VOLD, measures the difference between volume flowing into advancing stocks and volume on declining stocks for that day. It’s made up of two separate tickers, $UVOL and $DVOL which measure the up and down volume separately. While the $VOLD measures the volume ratio for all NYSE stocks, you can also use $VOLSPD which measures the volume ratio for just S&P 500 stocks. The actual readings are not that crucial but instead I want to see where the trend is going that day. Putting this up on a 15 minute chart is a simple way to get the market’s true intentions and the example below shows just how important it is to stay on the right side of a trending day in the markets.

On this recent day to the left in the chart, the SPX started falling after the open before seeing a bounce back after 8am PST. However the $VOLD volume ratio did not bounce and actually made new lows at point 1. This was a clue that the SPX was going to roll back over eventually and likely make new lows into the close, which it did. The next day the SPX opens stronger and the $VOLD confirms buying strength as the amount of volume flowing into advancing stocks was clearly leading things. When you get nothing but green bars like this on the $VOLD 15 minute chart, it’s a sign the markets are very likely to trend up and close near the highs. 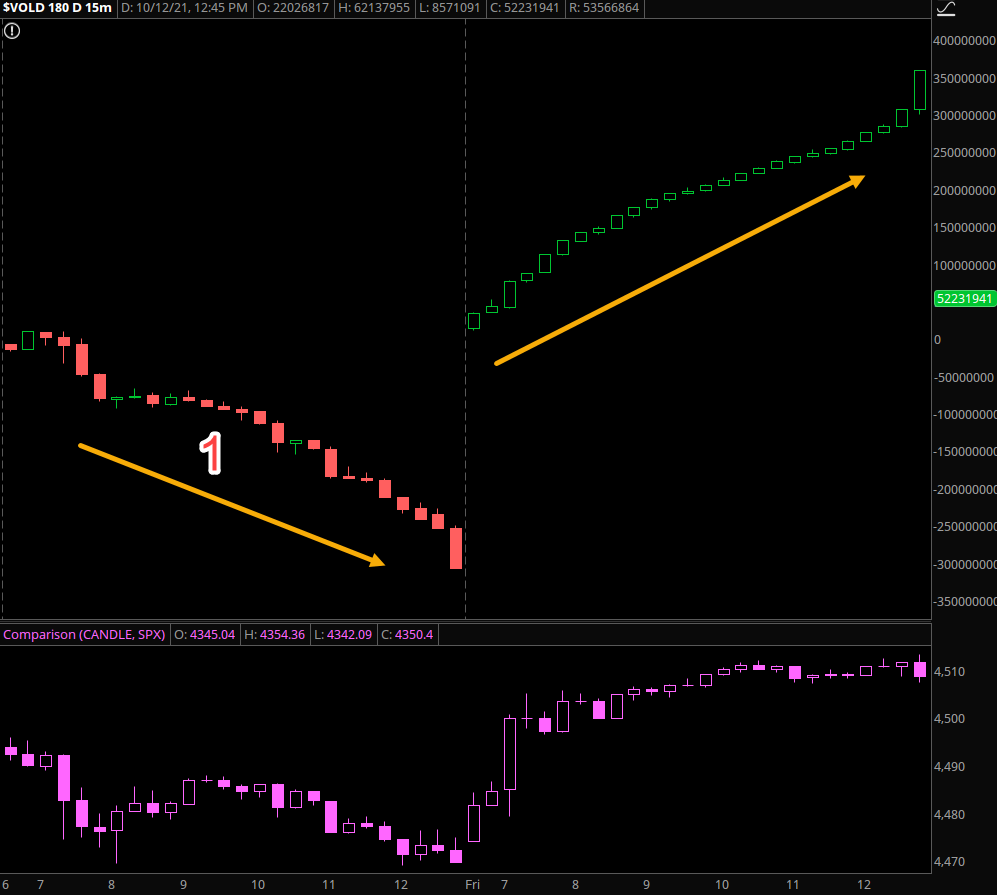 Lastly the VIX, or the volatility index is the measurement of implied volatility of options on the SPX. I could probably write several posts on just this but I wanted to include it as a market internal because in times of higher volatility where the VIX is above its historical average of 16 it becomes a great confirmation signal to use. When the VIX is above 20 or 30 it’s even more crucial to watch as it will often do the opposite of what the SPX is doing since implied volatility generally rises in times of fear or panic caused by market volatility. The index products like SPX have an options volatility skew to the downside because of the embedded velocity of risk markets tend to experience when they sell off. This just means stocks fall faster than they rise.

When volatility is alive and rocking, the VIX sees a lot of hedging related action based on SPX put options being bid up or sold. In general you want to see a soft VIX moving sideways to lower when the stock market is rallying. It’s when things diverge from normal that the VIX can provide a great signal to be more confident in making new trades. For example if the SPX is falling and in the midst of a market correction as we have seen lately, the VIX should also be rising indicating a demand for put protection from SPX traders. If instead the implied volatility of SPX options is falling that means very likely there are volatility sellers out in force and selling puts. This drops IV of the SPX options and translates to a lower VIX. For many interrelated reasons that are beyond the depth of this post, this can cause dealers to cover their hedges and produce upside price action in the SPX.

One of the most extreme examples of the VIX diverging from the SPX was during the COVID crash of 2020. The VIX surged in the first few weeks of the crash all the way up into the 70s as the SPX fell under 2500. By March 16th the VIX closed at its highest close over 82. The SPX closed that day at 2386. Pretty close to the eventual lows but still roughly a week prior to the actual lows of 2191. The VIX topped a full week before the SPX bottomed. Fear had run its course and by the time the SPX hit its low on March 23rd, the VIX was already fading back to 60. As you can see in the chart below at point 1, this divergence was clear as day in hindsight and even in the moment it was was a white flag that perhaps the lack of new highs in VIX was indicating volatility sellers have entered the market and SPX put hedges are being sold and closed out. This happened to occur during March quad witching expiration week. A huge time of the quarter for funds closing or rolling hedges and large options positions. By watching the VIX for divergences when it should be doing something but instead starts to do the opposite of what the crowd is expecting, it can be an amazing confirming signal to add to your market internal toolkit.