What is Earnings Drift?

Every quarter when companies report their earnings the market reacts to it and sometimes the stock will move greater than the implied move in the options market was pricing. This is essentially the setup for an earnings drift trade. The earnings drift is an occurrence that has been followed for a while and is when a company reports much better than expected numbers and the stock rallies sharply higher for days or even weeks after in a “drift” like fashion. Depending on the broad market and where the stock is on its price chart, the stock may simply drift sideways to higher or continue to breakout to new highs strongly. This can work on the down side too, especially in bear markets. If a company reports worse than expected earnings the market will punish it severely and the stock may bleed lower for several weeks before it shows any life.

How much a stock moves on earnings can vary based on their beta and overall volatility so a 10% move for one stock might seem high but if the options market expected a 10% move based on the implied volatility levels then it’s not outside of expectations. Understanding what the options market is expecting is step one to this trade idea so reading up on Expected Moves which I have written about before is a good primer. Stocks are all about expectations and the options will always give a good clue into what the market is expecting. It’s those outlier moves that catch the market makers off guard and move 2 times the expected move or greater that create opportunity. That opportunity is the earnings drift trade setup.

Sometimes this trade opportunity can be a small continuation move for a few days or sometimes it can produce massive gains if there is added fuel such as a high short float in the stock that forces shorts to cover into strength. Of course this is much more likely in a bull market like that of 2020 and 2021 when new highs were a common theme month after month. The overall market environment should always be a guide post to understanding what the potential of this trade opportunity is. If you don’t like to enter a trade before earnings due to the unpredictable nature of the outcome, then the post earnings drift trade is a great way to still participate in a potential move. The nice part is these kinds of moves happen over and over, and when they do, it is rarely a one day move.

On 4/20/21, NFLX gapped down much more than expected after reporting poor earnings. The stock was pricing about a 10.5% implied move based on the options market. It opened the next morning down 30%. About 3 times the expected move to the downside. That might make some traders think it’s a time to buy the dip but it’s rarely the case when these Earnings Drift trades occur. Especially if the move is in the direction of the overall trend on the daily chart and broad market. These types of events tend to continue to “drift” in the direction they came from due to the amount of trapped market makers and investors. Dealers or market makers need to sell short stock into weakness to balance out their delta exposure from likely short naked puts. The reason is often not the important thing but I know some people like to have a reason.

In the daily chart you can see NFLX continues lower for several days in a row after the initial gap down candle. The stock was so weak it could not even get above the previous days high until 6 days later where point 2 is labeled. On this day a reversal candle formed which could have been an exit trigger from the short trade setup. The close on this day was 199 after making a low near 186. From an initial entry near 235 after the first 15 minute candle was breached to the downside, that is a solid winning earnings drift trade. The stock went on to make even lower lows as the overall market was quite weak during this time as well. These trades seem like you will always be getting in late after the big move has been made but the thing is when the floodgates open after a monster move it tends to have a lot more momentum that needs to be released fully. 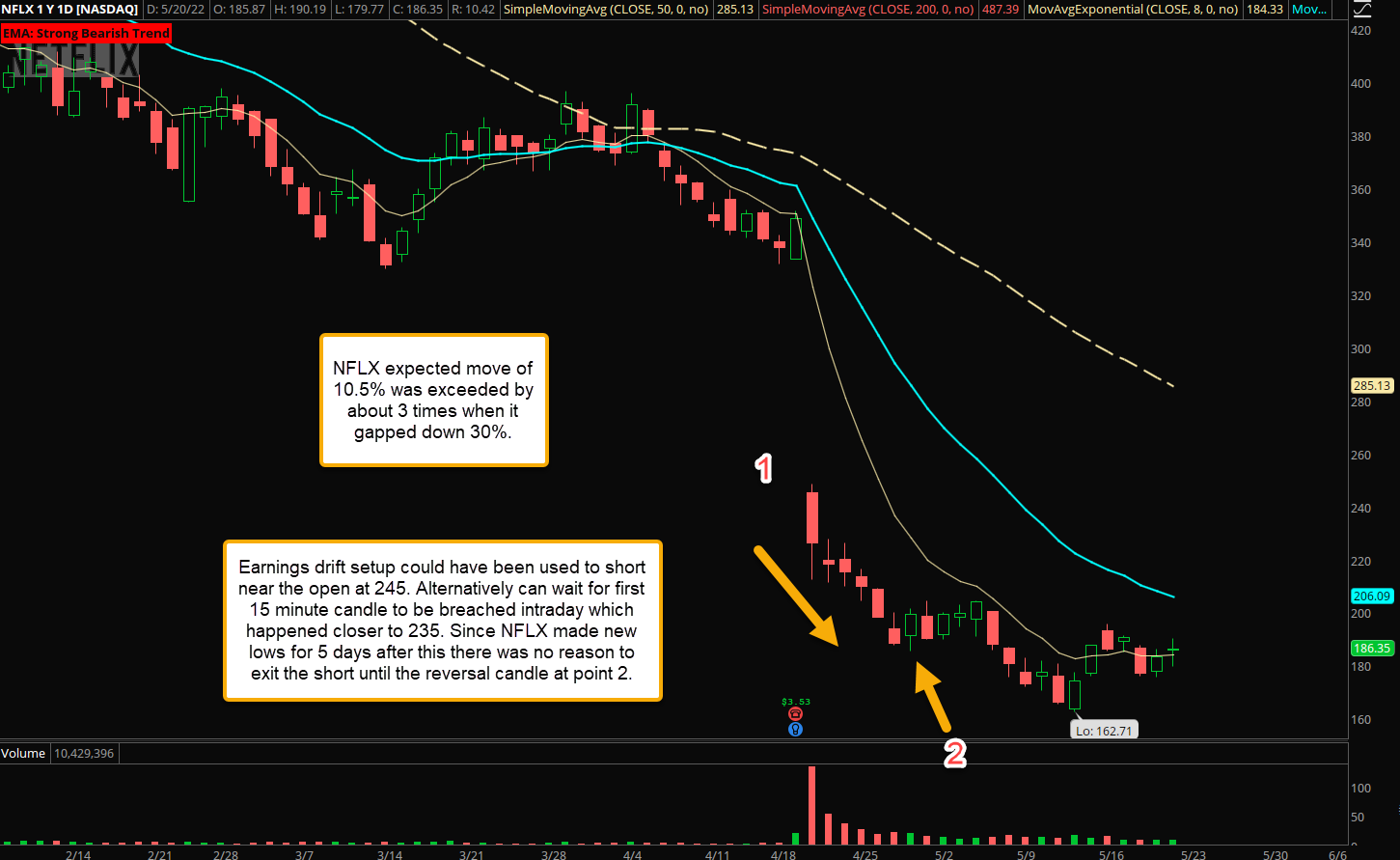 At the end of 2021, RBLX was one of the darling momentum stocks of the bull market and on 11/8 it reported great earnings that resulted in the stock exploding higher well beyond the expected move. The options were implying about a 10.5% expected move on earnings. The stock gapped higher the next day and opened up about 30% before finishing the day higher by 42%. This example is an interesting one and perhaps a bit trickier because a trader could have played it multiple ways and times. The first chart shows the daily chart as the stock had some volatility the few days after reporting. Initially a strong green candle was sold the next day but the red day did not close below the low of the gap higher candle. The 3rd candle labeled as point 1 shows an inside day candle that sets up an opportunity to trade a breakout higher above the white horizontal line. Once RBLX cleared that high of the inside day candle it didn’t look back. Closing higher for 6 straight days into all time new highs before reversing from 141 on 11/22 and forming a bearish selling candle. The move back under 128.50 would have been the exit signal if a trader was still long the stock from the original entry near 100. 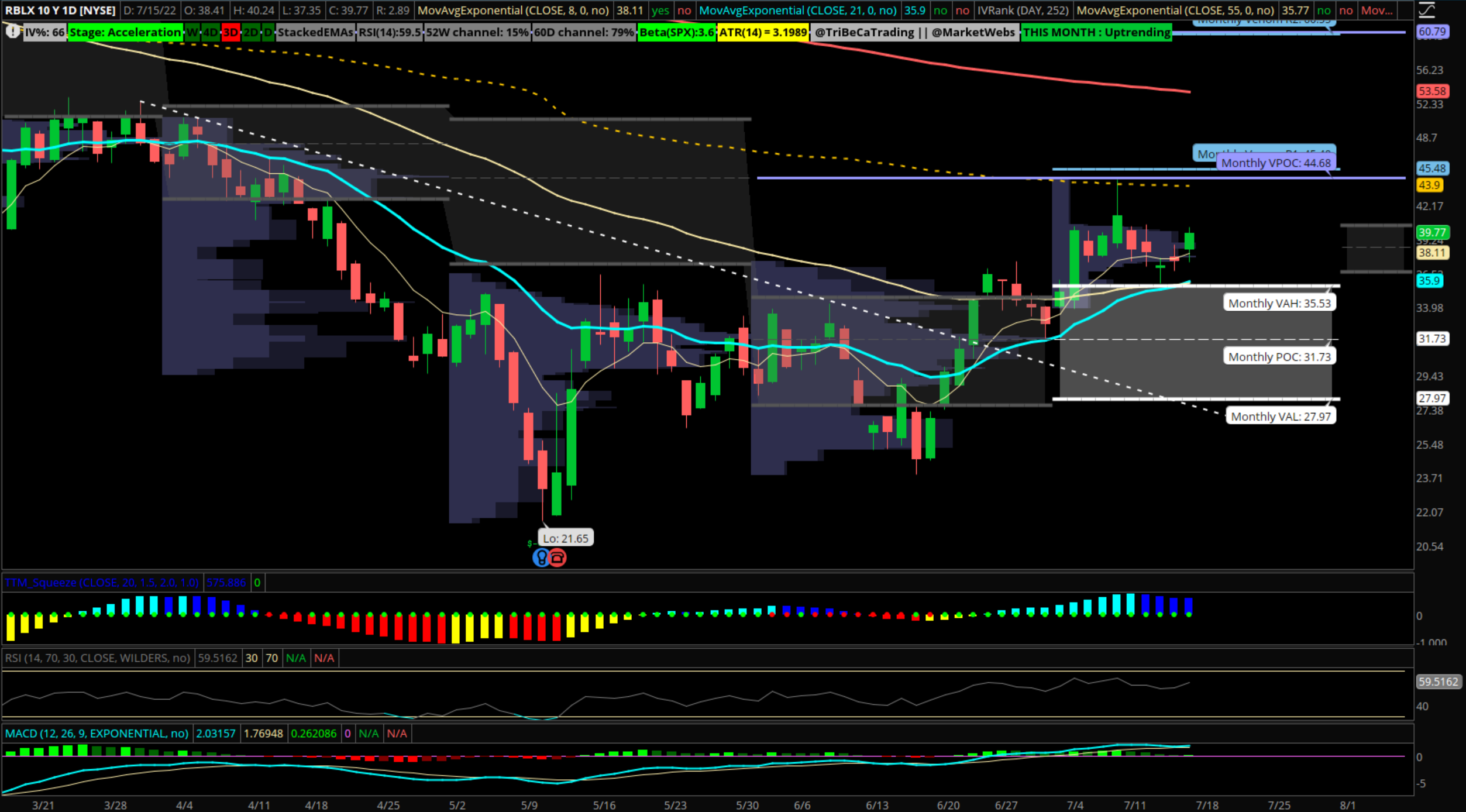 The second chart below shows RBLX during that same time post earnings but instead this time zoomed in on a 15 minute chart showing an example of how this play could have been day traded for a quicker move the day of earnings. Similar to the daily chart, RBLX opened volatile and tried to form a range the first hour of the day. Eventually the 3rd 15 minute candle formed an inside candle and price broke out above that spot where the arrow is shown. The stock quickly made a new high of the day and proceeded to grind higher the rest of the trading session and close at the highs near 110. This could have been traded multiple ways depending on the timeframe you prefer but the point of this earnings drift setup is to look for price action to continue in the direction it came from because the expected move being exceeded means many traders are the wrong side of the move and they will likely push it further since they need to in order to exit. 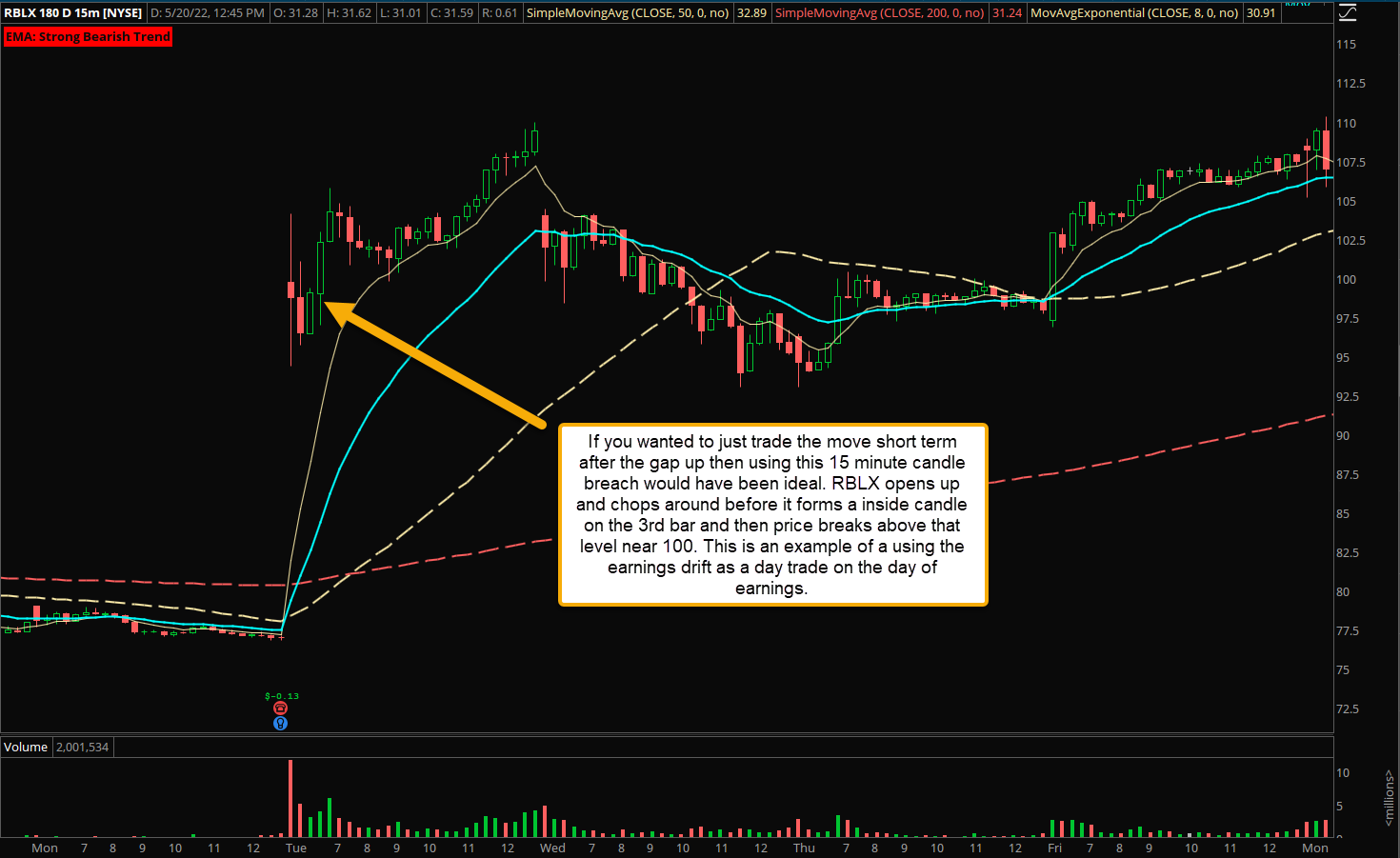 The earnings drift trade can be used to the upside in bullish moves or to the downside for bearish moves. It helps to be in the path of the dominant long term trend and overall market behaving in the same direction tends to have the best outcomes. The broad market will always be the focus before taking a momentum trade so it’s important to understand the environment we are in whether it’s a bull or bear market bias since this tends to power the momentum that occurs beyond the expected move of what the market was anticipating into an earnings report.

Every month there are large gap style moves in stocks that report earnings or just unexpected news as well. Another example of this was Tesla (TSLA) during the late October 2021 parabolic runup after the news it was partnering with Hertz. The stock gapped higher into all time highs and continued to rise for weeks. I have noticed that where a stock is in relation to its 52 week high or low or even all time highs makes a difference in the potential power of the earnings drift trade outcome. You want to target names that are making outsized moves into space or lack or resistance on the upside.

The main filter I try to focus on is the 2x implied move. Can it be played with a 1.5x expected move? Probably but keeping it simple and knowing when a stock has exceeded 2 times its options expected move makes it more clear that there will likely be continuation into that direction and the setup is meeting specific parameters that can filter out the noise of other earnings moves. Then riding that momentum for all its worth.