The volume profile is a study that goes back many decades to the days of floor trading. Very similar to “market profile” which uses time or “TPO’s” (Time price opportunities), the volume profile simply aggregates where the majority volume has been traded in a specific timeframe. Originally created by J. Peter Steidlmayer, a trader on the Chicago Board of Trade from 1959-1985. He was seeking a way to determine and evaluate where market value was as it developed intraday. The concept was to display price on the vertical axis against time on the horizontal axis. The resulting visual generally is a bell shape, fatter in the middle prices, with trading volume activity trailing off as volume decreased at the extreme high and low end of the price range for the day. Market profile and volume profile was then introduced more to the public in the late 1980s and into the 1990s. A great book to read about this topic is “Mind Over Markets” by Dalton. I read this book a few years into my trading journey and it helped me see the market for what it truly is, just an ongoing continuous auction process.

What is a Volume Profile?

There are various studies that one can use for volume profile depending on the site or platform used but they all essentially give you the same information about a market. Volume profile represents trading activity over a time period that is specified by the user. This visual reveals where the dominant price values are in terms of volume traded. The longest row or width of a price value level shows the price level at which the most number of real trades were made during the timeframe. This level is also called the Volume Point of Control or VPOC. By default the price range surrounding the VPOC level is where 70% of the trading activity or volume took place for the specified time period. This zone is called the “Value Area” because that is where the market has determined there is market value for the stock since roughly two thirds of the volume traded in the range.

Using the default Thinkorswim volume profile study you can see below, the SPY chart going back 6 months has a VPOC at the red line of roughly 468.60. This represents the volume point of control for the last 6 months of time. The most amount of volume has traded at this level which makes it important as buyers and sellers have agreed on price the most here. This level will act as a magnet in a choppy market. Looking at the value area in this example shows a wide range between about 438 on the low end of value to about 470 at the top end of value. This shows where 70% of the volume for SPY has traded over the last 6 months. Very useful to see a visual like this in trying to determine where prices seem fair for the timeframe you are trading. By definition if price is trapped inside of value for a given timeframe then it is more choppy and not trending. If price breaks above the value area and closes convincingly then we have a trending market that may want to expand higher based on participants agreeing on higher prices which would then eventually push the value area higher. 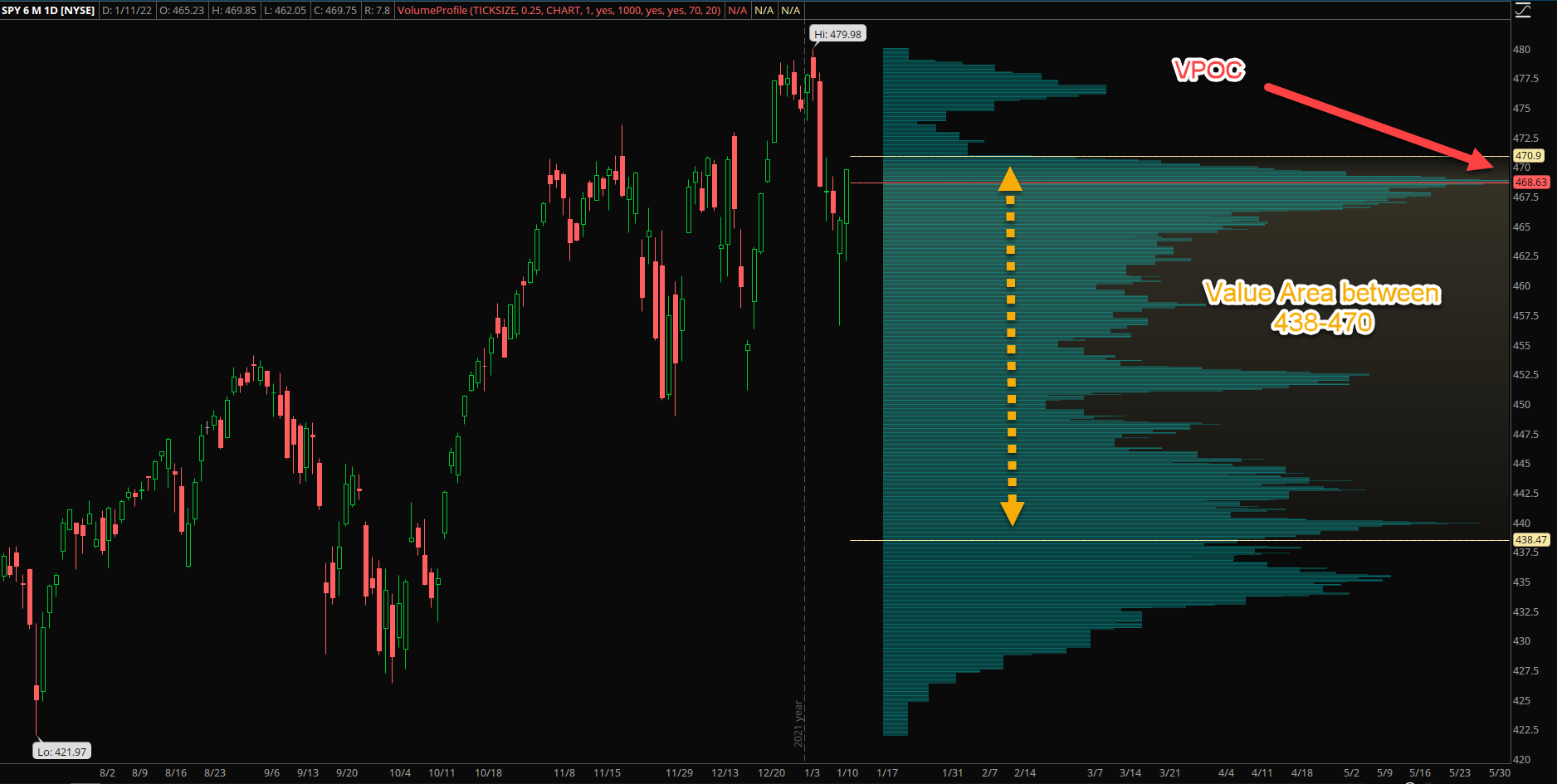 In Thinkorswim, the default settings are set to DAY timeframe but you can change this to fill the whole CHART or just this MONTH or WEEK. It all depends on what you’re trying to display. Each time frame will have different value area’s since these zones are based on time as well. If you are more of a swing trader then focusing on the MONTH profile can be helpful to determine where shorter term value is seen in the current or past month. You can also have this profile moved to the right of the price chart if you select Yes under ‘On Expansion’ instead of overlapping prices. 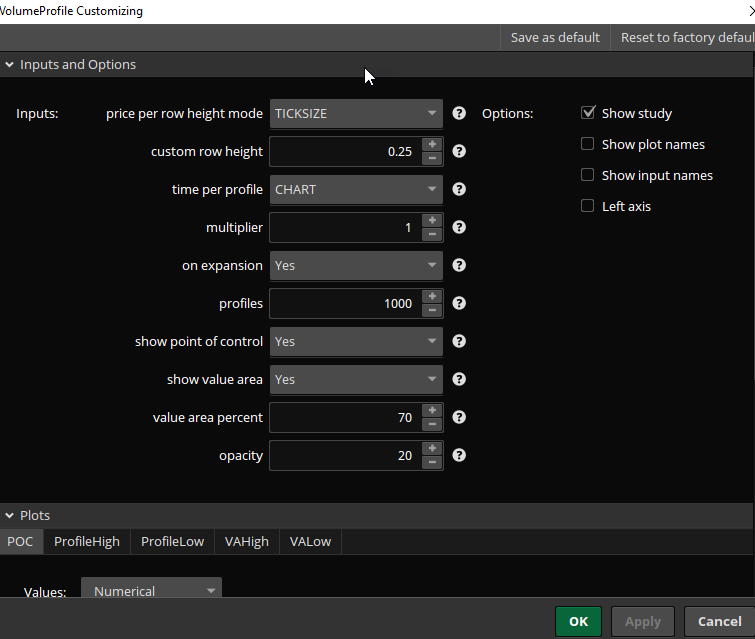 Value Areas and How to Use Them

I use a version of the volume profile that gives you displaced profiles separated by timeframe and allows you to see clearly the prior timeframes value area with a shaded area. This makes it easier to get a visual of what price areas are key and pivotal. Whether you are looking at a monthly value area for swing trading or a daily value area for day trading it’s these levels that give you a road map to where the market is finding value or rejecting price away from value.

Value is the fair market price of a stock based on the most amount of transactions happening there so price will gravitate to that zone when things are quieter and establishing a range. Price is just the advertising mechanism. While value stays more concentrated on a zone. Traders are always getting themselves chopped up if trying to trade directionally when there is no clear trend. This is usually happening when price is stuck inside of value. Think about it. If a stock is trading within its recent value area then buyers and sellers are agreeing on price. This creates sideways choppy price action. In order to ride a trend you need prices to be accepted outside of value. On the example chart below I have AAPL on a daily timeframe with the shaded monthly value areas. The thicker white horizontal lines are VPOCs and the top of value is shown by a thin green line while the bottom of value is a thin red line.

At point 1 you can see AAPL broke out of its monthly value area high near 153 and ran up very fast to about 165. The stock was inside of value chopping around for several weeks until the move transpired. The why behind a move is never important, it’s all about where the stock is coming from and where it’s trying to go. And then your job as a trader is to determine, with pure objectiveness, how well the stock is doing on its attempt to move in that direction.

At point 2, AAPL pulls back sharply from its highs and drops over 10 points in two days. But the top of monthly value support is 160 and it finds buyers very close to that level before rallying to close the day at highs nearly 5 points off the lows. You can see this support bounce occurred between the 8 and 21 day EMA which happens to be very close to the top of monthly value. This is a good example of a cluster of different support levels coming together to make a buy level that much stronger and this should give a trader confidence in placing a trade to buy the dip. 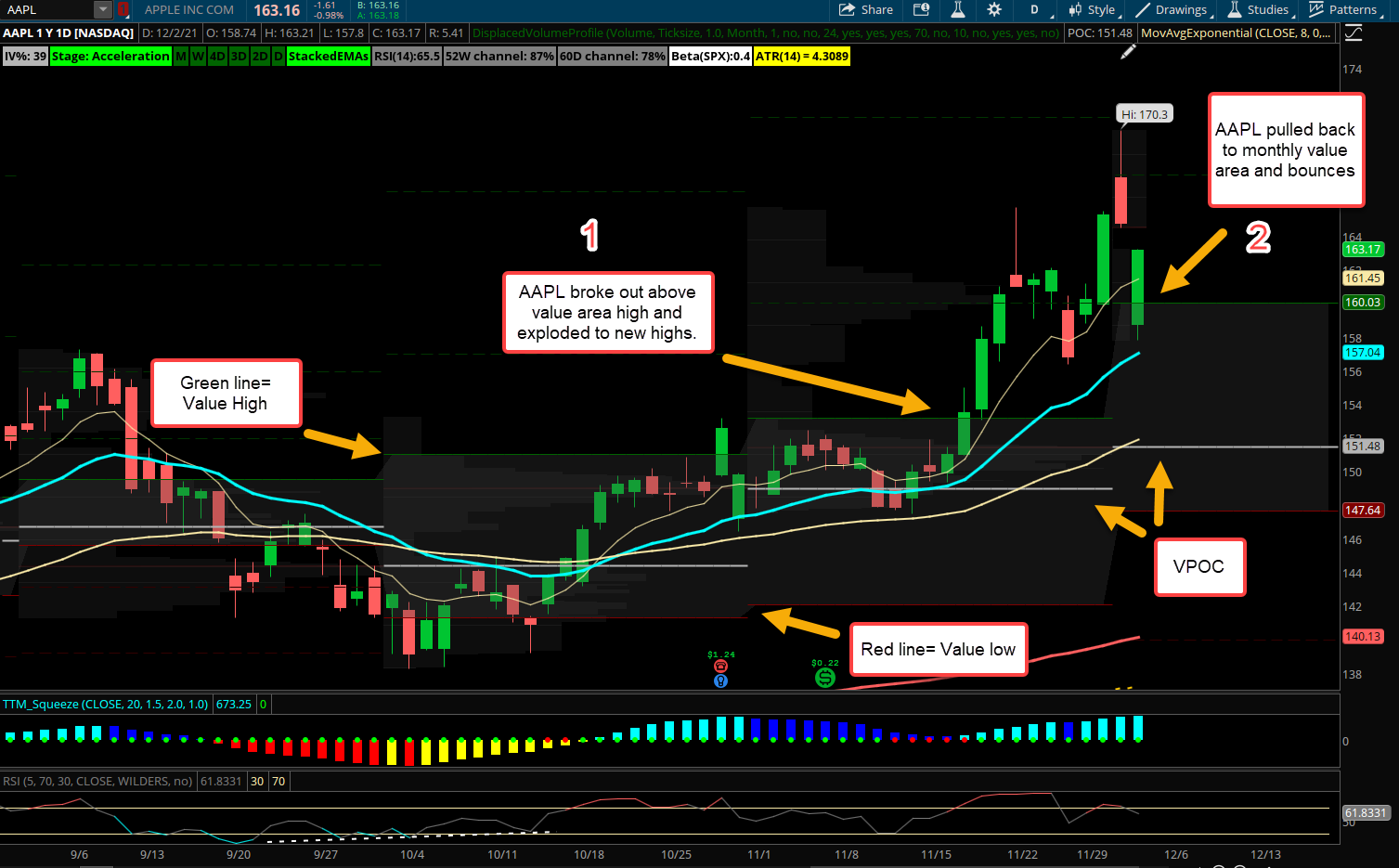 How to Use VPOC levels

There are several ways to use VPOC levels, one of which can be to interpret trends and how strong the price is in relation to the distance away from its VPOC. Since the volume point of control is the most traded price level in a given timeframe it can act as a magnet since price has memory. It will often be retested numerous times within an ongoing trend. Whether it is a long term trend or a short term trend price will go to where it is seeing value and that is the VPOC. As the chart below shows in TSLA throughout late summer 2021 it was starting to emerge from a base and form a very strong trend up. Normal pullbacks within the trend came back to test the monthly VPOC levels of support and quickly bounced, leaving wicks or hammer candlesticks. At point 1 you can see two times intraday where TSLA tested its VPOC that month and saw a fast rebound which rallied back above its value area. These are important levels you want to know about as a trader and have alerts set to act on these opportunities. In trading, good prices don’t last long because the market realizes what is value and it quickly prices that in. 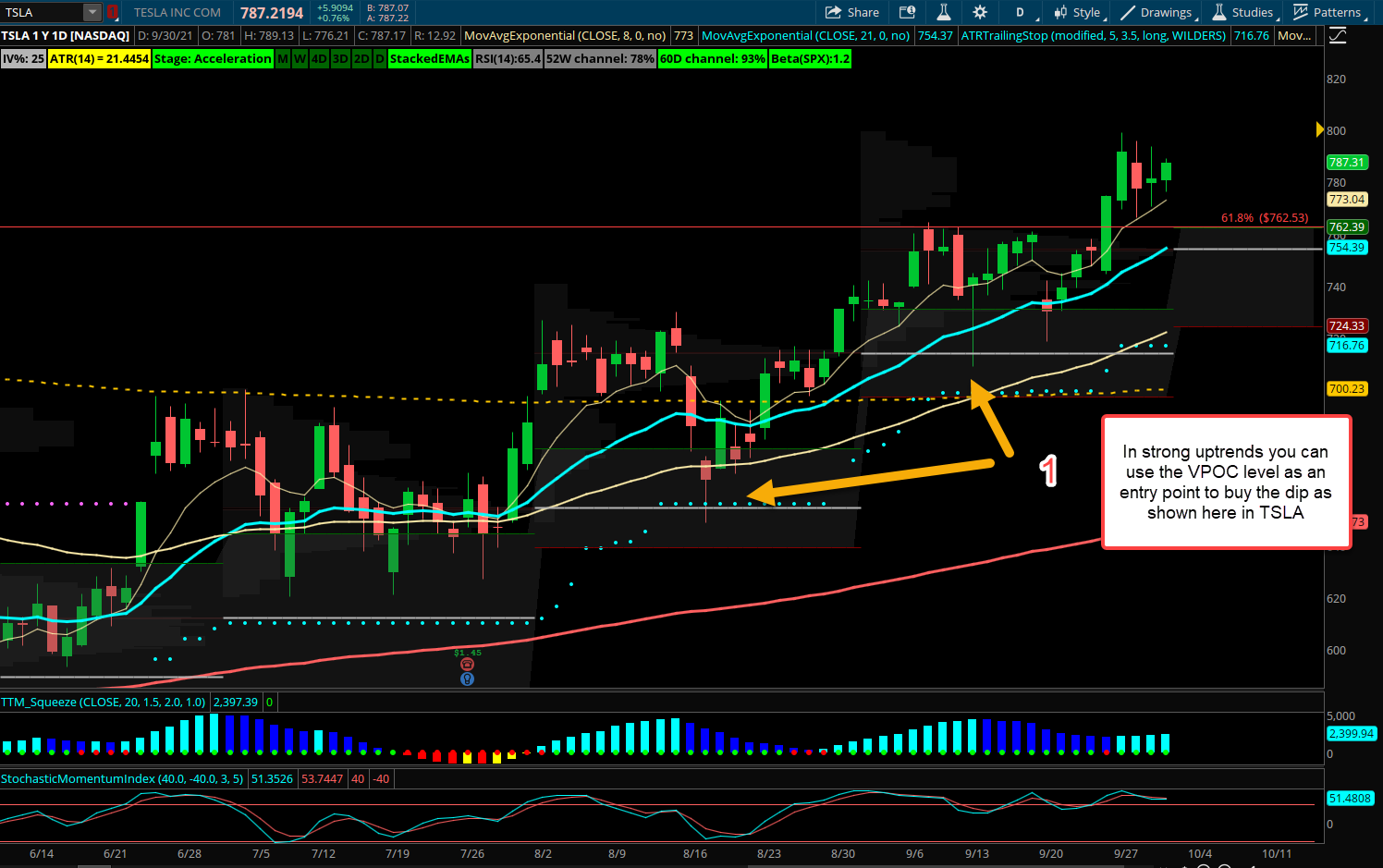 These value areas can be used on any timeframe whether you are scalping a 5 minute chart on a daily profile or focused on the longer term weekly charts and using a one year value area. The NFLX weekly chart below shows how the stock acts around its yearly 2020 VPOC level of support at 490 roughly. This is not drawn in after the fact. That line was there based on the prior year seeing the most volume traded at that level, thus creating its VPOC for the year at that zone. Clearly you can see the power of that volume support as it held price 3 times in the first half of the year. Looking to buy retracements to key VPOC levels or wait for reversals off that area is a fantastic way to utilize these key price points. On the upside NFLX was unable to break out of its value area highs near 560 until it finally closed above in August 2021, which then produced a sharp advance to new highs. 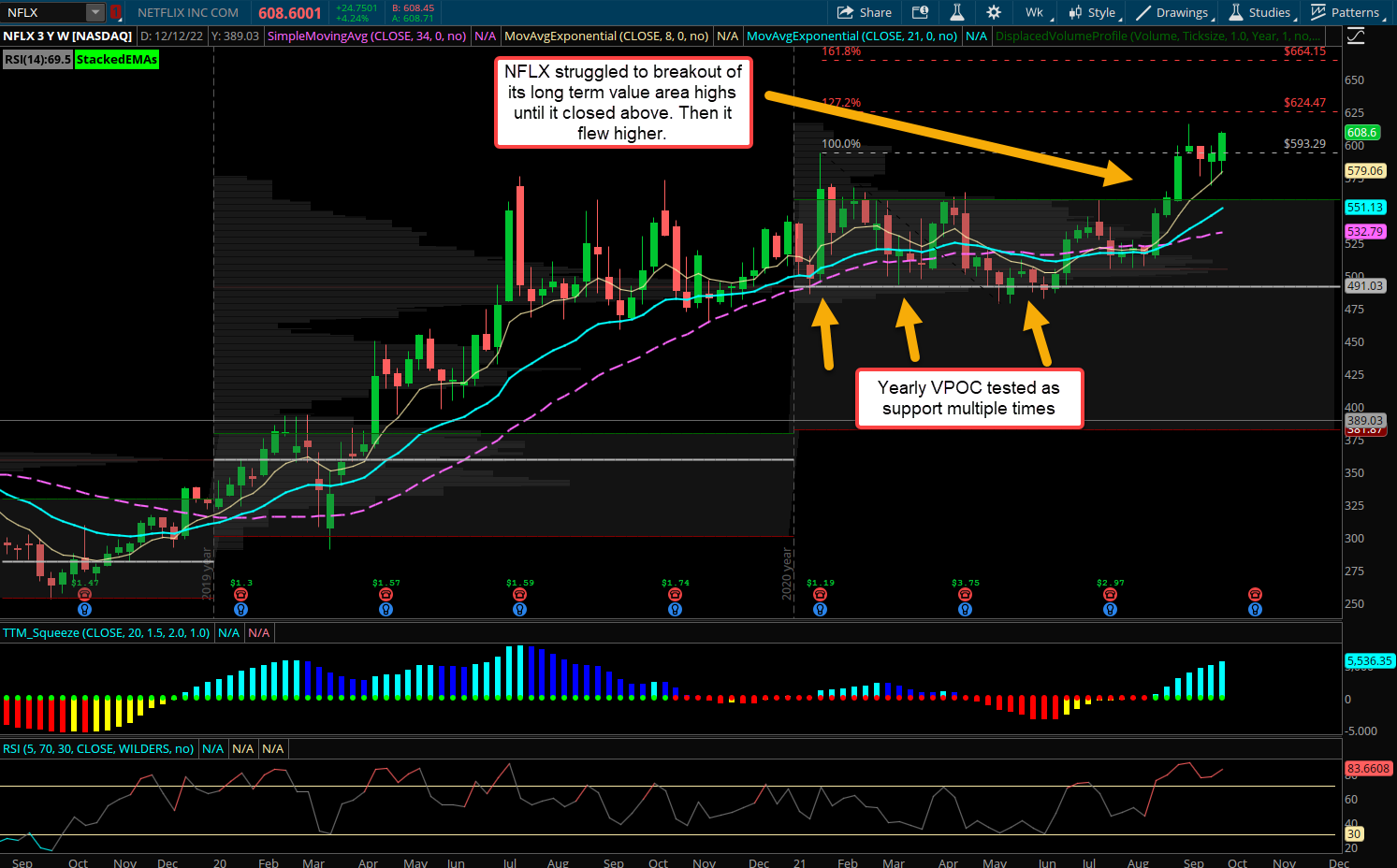 One of the main rules in volume profile or market profile trading logic is called the “80% rule”. This rule states that once price enters inside one end of the value area (closes one bar inside) then price has a 80% chance to rotate back to the other side of value. This is simple and effective because it works. It doesn’t mean it’s exactly right 8 out of 10 times but over the long haul you can expect to see more occurrences than not unfold this way. Using the theory that prices act in the same way as an auction process you can see that once a market accepts price inside a certain range which is deemed as value then the crowd tends to catch on and see the reversal which then gains steam and “auctions” price further to the other side of the value area.

On the hourly chart of the ES futures below we see weekly value areas and the top arrow shows where price rejected off the top edge of its value area. It was unable to break above and close over value so the only other thing price could logically do is to auction lower in order to “find buyers.” If price exhausts into highs it must look for the next buyer, which is usually lower. Sometimes this becomes much lower. As prices reentered the value area near 4419 you could have sold your longs and potentially went short as it was clear that the 80% rule was likely in effect and price might fall much further to the VPOC at the least near 4364. On these kinds of reversal moves, targeting the VPOC to exit a trade is an excellent way to plan your trades. Often you will see the VPOC act as a temporary bounce spot but if selling is strong enough you will see the 80% rule unfold and the other side of value get hit. In this case I took the screenshot before the price got to the 4318 lows but it did eventually touch that level. This completed the 80% rule trade reversal after it traveled from one side of value to the other. 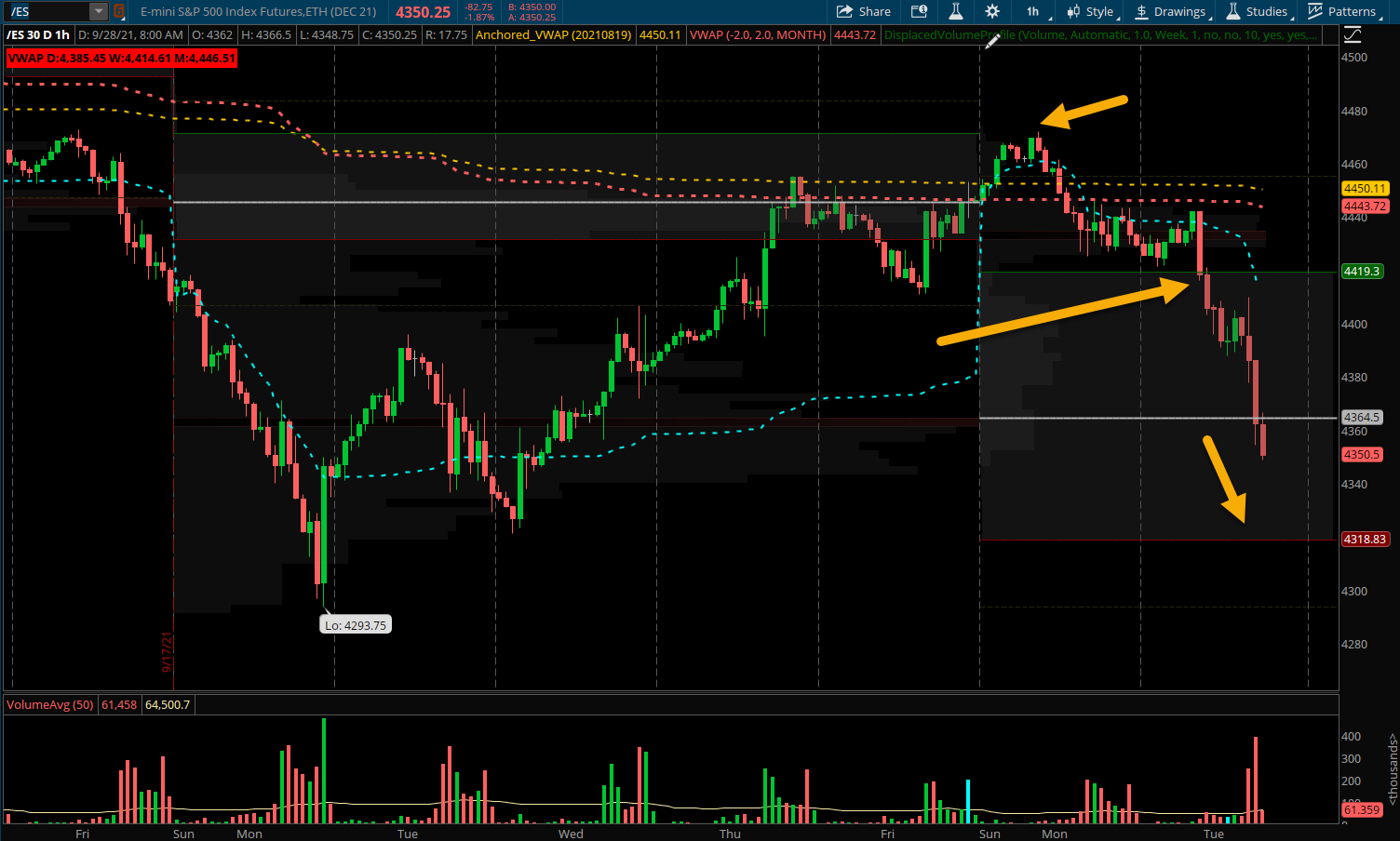