Riot Blockchain (RIOT) and Marathon Patent (MARA) shares each closed higher by more than 40% on 2/8 as Bitcoin priced surged to $45,000. The move came just three sessions after we wrote an in-depth view on the names after a large call buy in each gave us confidence in the potential while the chart was also set up perfectly.

“Riot Blockchain (RIOT) and Marathon Patent (MARA) both with strong momentum to start 2021 and on 2/3 each saw sizable trades, the largest to date, with RIOT September $40 calls with over 5000X bought to open for over $5M and MARA with 3500 max-strike September $40 calls bought for over $4M, and previous 1500 bought on 1/26 for $1.1M. Both names have seen plenty of activity with the momentum, but these are large institutional trades that stand out. MARA and RIOT have similar charts after a strong move since November lows shares have consolidated with the rising 34-day moving average supportive and look poised to move higher with RSI working back out of a downtrend. Neither names had significant revenues in 2020 but both see hyper growth in 2021. Distributed blockchain technology is a decentralized and encrypted ledger that is designed to offer a secure, efficient, verifiable, and permanent way of storing records and other information without the need for intermediaries. Cryptocurrencies serve multiple purposes. They can serve as a medium of exchange, store of value or unit of account. Cryptocurrencies are decentralized currencies that enable near instantaneous transfers. Transactions occur via an open source, cryptographic protocol platform which uses peer-to-peer technology to operate with no central authority. The online network hosts the public transaction ledger, known as the blockchain, and each cryptocurrency is associated with a source code that comprises the basis for the cryptographic and algorithmic protocols governing the blockchain. RIOT is focused on developing its cryptocurrency mining operations and investing in blockchain-focused technologies. Its mining operation in Oklahoma hosted about 8,000 ASIC miners during 2018 and 2019. During December 2019, the Company purchased 4,000 next generation Bitmain S17 Pro Antminers which have now been installed and are currently operating. MARA purchased cryptocurrency mining machines and established a data center in Canada to mine digital assets. MARA sees potential to grow monthly revenue to $60M by Q1 2022 as it builds the largest self-mining operation in North America at one of the lowest energy costs. MARA is increasing production and building out new facilities. It is on track to produce 55-60 BTC per day at an average cost of $4,541/BTC and has $455M in cash with no debt. MARA’s market cap is currently $2.05B and RIOT’s is $1.06B. Analysts have not really started covering these names. “

As covered in the write-up it is important to look for institutional sized trades and in this case hot momentum Bitcoin proxies had consolidated in nice bull flags providing a perfect entry to catch a 40% move in shares and much larger move in the call options. 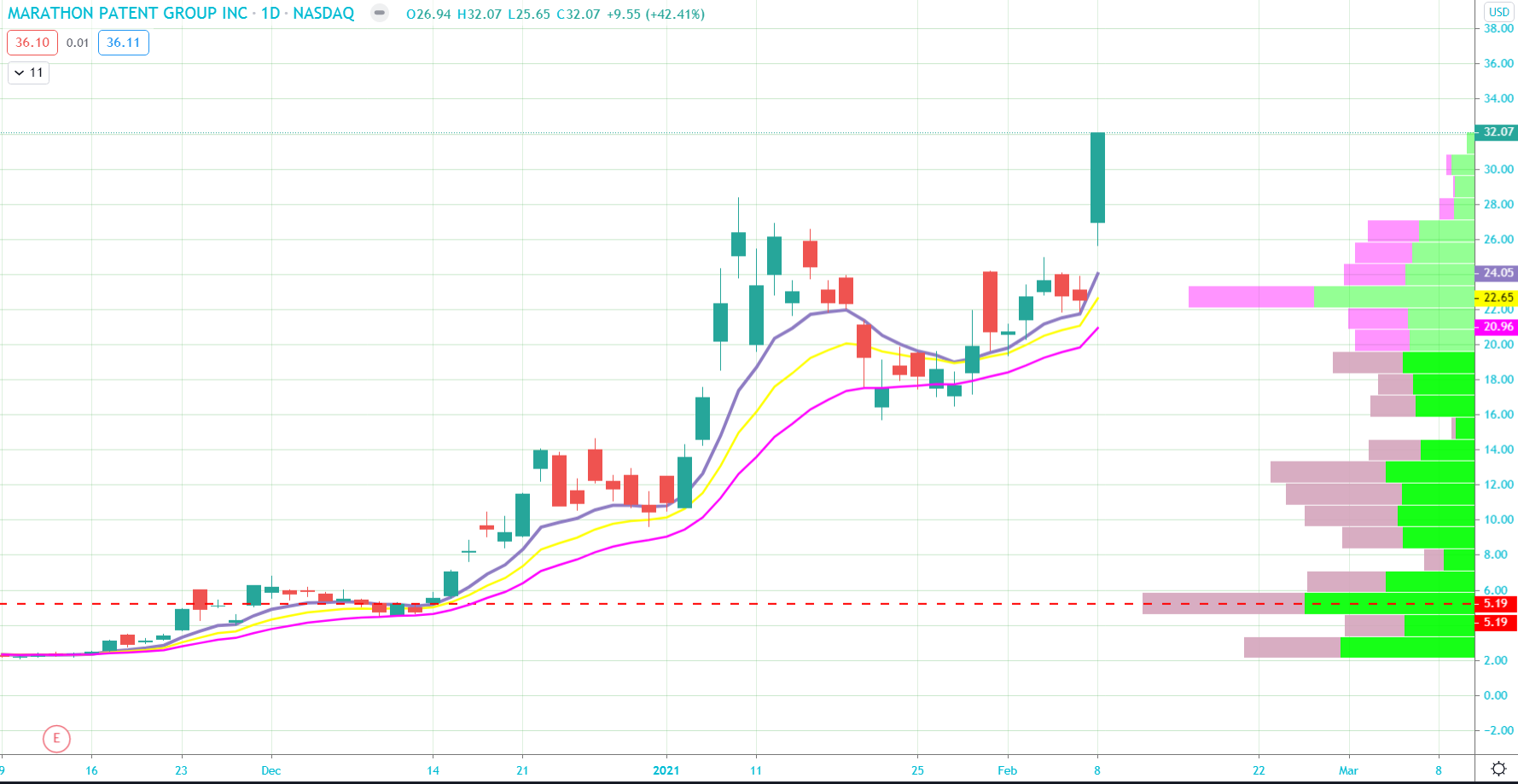