There is a lot of daily options flow with around 75% worthless information right from the start in short-dated activity and at OptionsHawk we focus on around 300 key positions per day for the Hawk Database but curate that down to 6-12 impact trades per day that fits our model for high hit rates.

Devon Energy (DVN) fit this criteria on 5/26 when we wrote a focus piece after noticing multiple days of bullish activity and the name screened well fundamentally while activity was right in our preferred 3-month out time-frame. DVN shares have climbed 60% in five months and the options positioned perfectly for October expiration with shares hitting $40 highs.

“Devon Energy (DVN) a name seeing consistent bull flow in the options market that continued on 5/25 with 1800 October $26 puts sold to open for $3.55. DVN has previously seen opening sales in July $26 puts while October $27 calls have 2000X bought and 14,000 of the October $30/$35 call spreads from a trade on 5/6. DVN also has seen call buyers in July $29, January 2023 $30, June $24 and $27, July $26 and July $35, steady accumulation since March. DVN shares are currently flagging beneath recent highs near $27 which also happens to be the 200-week moving average and have broken out of a downtrend that started from the 2014 peak with VWAP from those highs up at $30 and a 38.2% Fibonacci retracement target at $34 followed by a 50% retrace at $43. DVN is an independent energy company engaged primarily in the exploration, development and production of oil, natural gas and NGLs with operations primarily US onshore. In January Devon announced an all-stock merger with WPX, an oil and gas exploration and production company with assets in the Delaware Basin in Texas and New Mexico and the Williston Basin in North Dakota. DVN now has a market cap of $17.5B and trades 9.2X Earnings, 5.4x EBITDA and 28.3X FCF with a 2.43% dividend yield. DVN’s EBITDA is seen rising 173% in 2021 and 15% in 2022. DVN management has noted plans to implement a fixed + variable dividend model following its proposed merger with WPX. DVN is well positioned among larger E&Ps and screens well on FCF yield/balance sheet/valuation. DVN recently hosted an investor meeting noting for 2022, DVN is 20% hedged, providing greater upside to FCF if oil prices are strong. Further, DVN noted that 2022 will be the first full year of realized synergies from the DVN-WPX transaction. DVN noted that an ~$80/bbl Brent price would be a signal to consider higher capital spend/production growth relative to its current maintenance-type scenario. Analysts have an average target of $32.50 with short interest at 2.8% of the float. Goldman has a $32 target on shares and sees a nice balance of growth and returns of capital, added to its Conviction Buy List on 3/23. Mizuho raised its target to $35 last week on a higher outlook for Energy prices. DVN saw a 45% surge in hedge fund ownership in Q1 filings.” 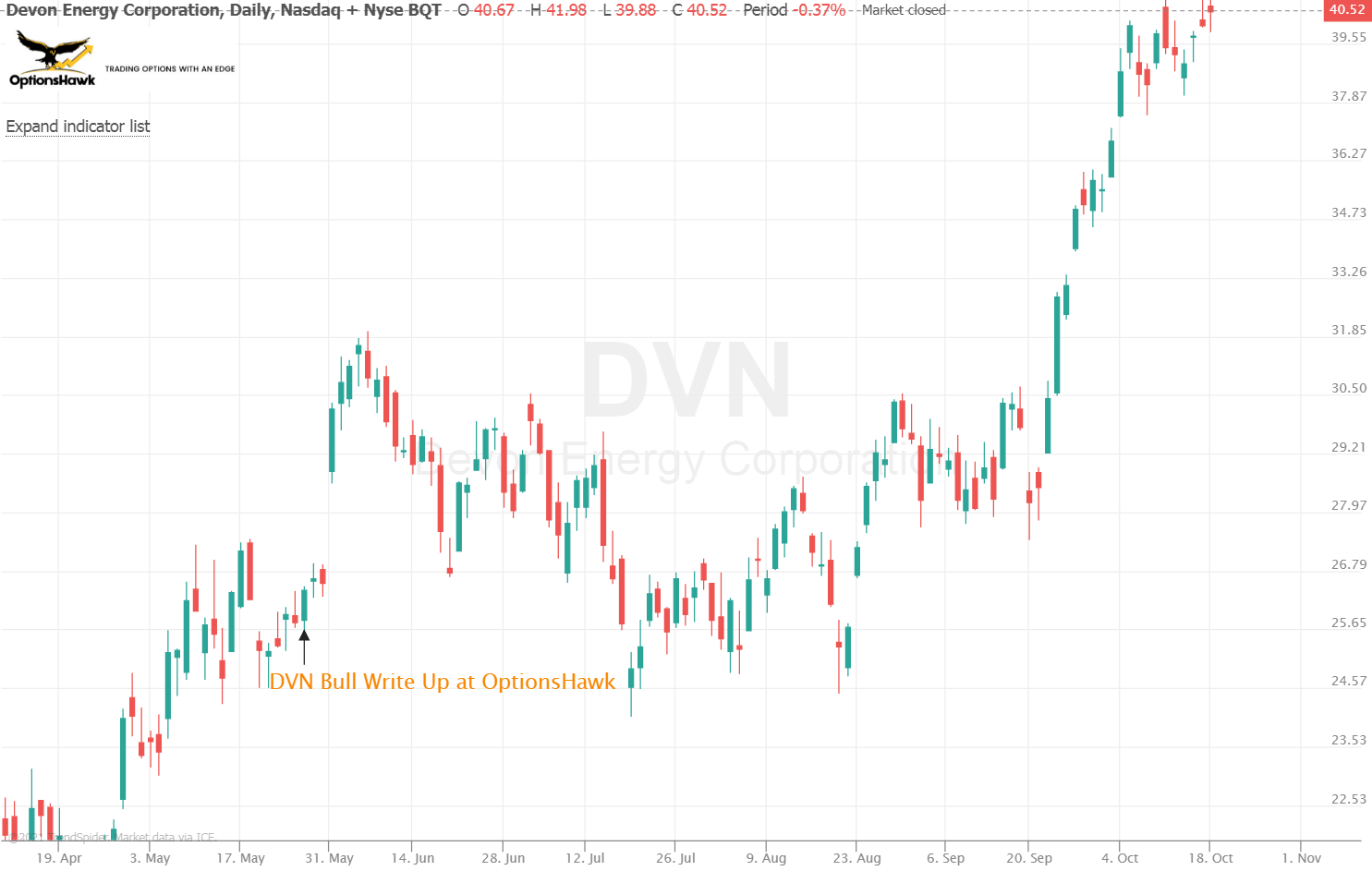