This idea came to me this week after a combination of seeing how it recently worked for me, anecdotal, and also that I see it done with large institutional option trades consistently.

The Martingale betting system originates from the 18th century. The legend says that it was invented by a casino owner in London in the 1700s. The Martingale was introduced by the French mathematician Paul Pierre Levy and much of the study in the area was carried out by American mathematician Joseph Leo Doob who sought to disprove the possibility of a 100% profitable betting strategy.

The Martingale betting system is most widely used in roulette because you can bet with 50/50 odds on red or black (aside from green zero). The system is a simple one to follow, you start with your initial outlay, say $100, and if you lose you bet $200 the next time, if you lose again, you bet $400 the next time, and so on. After you win you start back at the initial outlay and start the process over. If you have the capital to keep losing until you win this can be an effective system. The Martingale betting system is also often used in sports betting and though there are often table/bet limits that can squash this system in gambling, this is not the case in trading.

I admit that this is a hard system for me to get behind because I have never been one to add to losing trades (average down) and there is the “gamblers fallacy” element of thinking you eventually have to win. I would say that unlike table games and sports betting where the odds of winning are defined, it is a lot more complex in the stock market. On the other hand, the further you extend a time-frame the higher probability of positive returns in a stock market that almost always goes up historically, so there are ways to refine a strategy to increase your odds even beyond 50/50 and make this an effective strategy. The Grand Martingale variation may even be better in trading where there are no “bet limits” so you add an additional “unit” after every loss so the winning bets outweigh the losses. The system has become even a better one with stocks/options due to the now non-existent transaction fees.

There are some key elements I believe that can improve your odds:

The time element is important in the options world due to decay and I tend to trade weeklies with the goal to adjust by Wednesday’s close if the position is negative. It also becomes more complex as you are adjusting to different Greeks, so you would try to keep the initial outlay size the same in dollar terms while targeting a similar Delta you started the trade.

The pro traders are not generally utilizing an approach like this in short-timeframe options and see it more 3+ month expirations adjusting down and out a few months. An example that comes to mind is Expedia (EXPE) where I believe it is Melvin Capital making many of these trades. EXPE has seen massive buying in January 2022 calls since last March which continued all year through December, the $125 calls with 7000X, the $100 calls with 9000X, the $110 calls with 5500X, the $80 calls with 14,500X and the $130 calls with 14,500X all remain in open interest. These positions have done well if you bring up a one-year chart of Expedia. However, since May of this year there have been large buys in August, September, October and November calls that are mostly underwater and have consistently been adjusting to new months and lower strikes, while January 2023 $160 calls recently opened 18,000X for $43M as well. EXPE has been in a sideways to lower pattern since May with many of the reopening/travel names due to Delta variant concerns but they keep coming for calls expecting there will eventually be a catalyst for substantial upside.

The system at times will require a large bankroll which is why it is most likely best suited for professionals.

Airbnb (ABNB) is a personal example where I sort-of utilized this system. In mid-June shares looked great ready to breakout above VWAP off the highs with a volume pocket above to get back to $165 but after multiple fake-outs it never materialized. I kept adjusting from one week to the next, on Wednesdays to keep some premium, while outlaying the same initial investment. It got worse as shares sank in late July but at the double bottom with May lows I adjusted instead of to weekly out to September expiration seeing the advantage in having extra time at what looked to be a make or break level. ABNB shares since have made a nice 15% rebound and turned the position strongly profitable though not wanting to risk those profits into earnings this week. 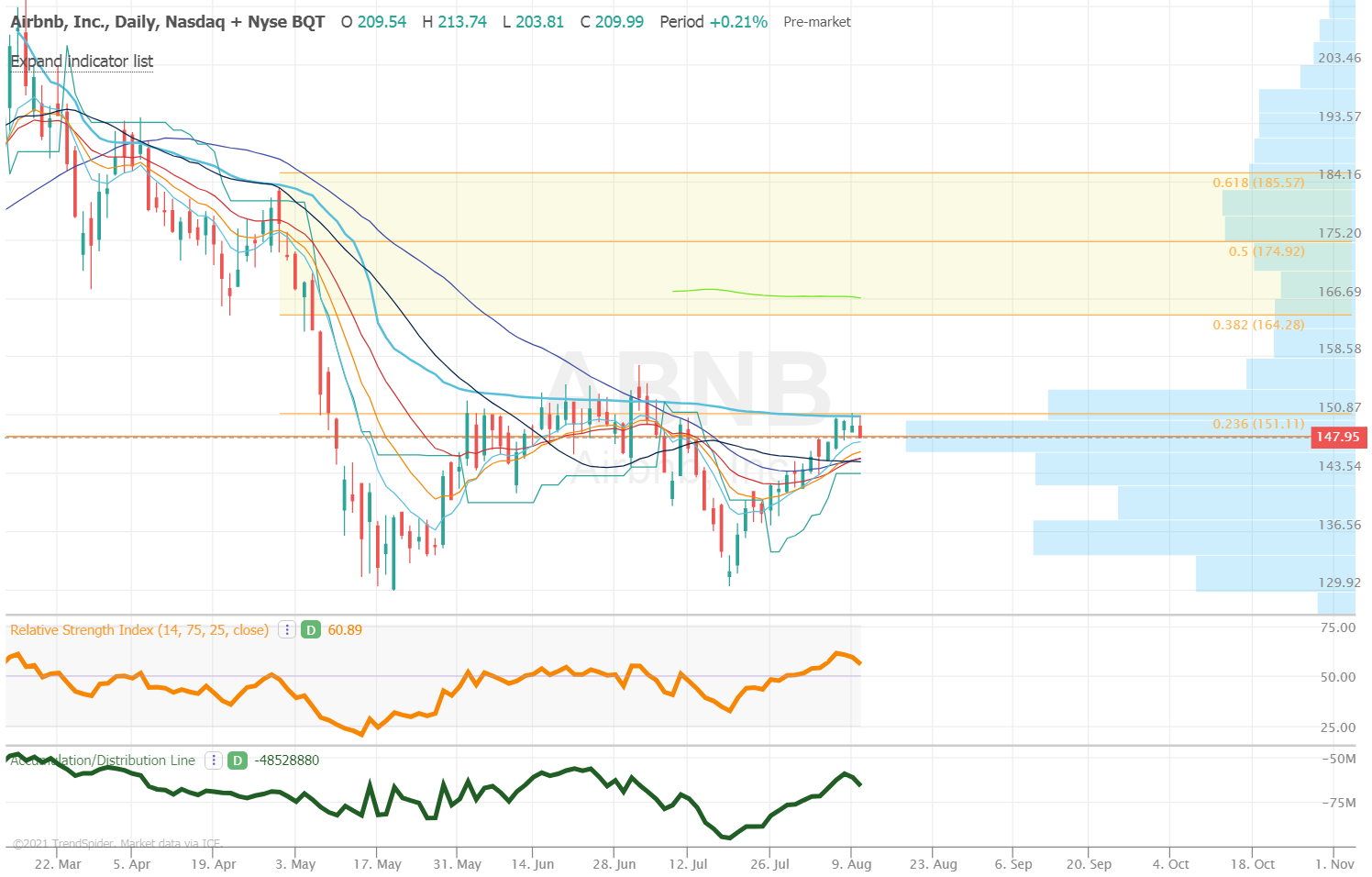 I will likely be applying this strategy to Snowflake (SNOW) today which looked posted to break out and make a run for the 50% retrace target at $308 while seeing a lot of bullish options flow but the tape shifted out of Tech/growth this week suddenly so it sits at a loss. SNOW will report 8-25 so likely want out before results but not a requirement and the key here is they although it sits a loser from decay it has done nothing wrong to violate its strong trend as it consolidates its most recent key breakout. 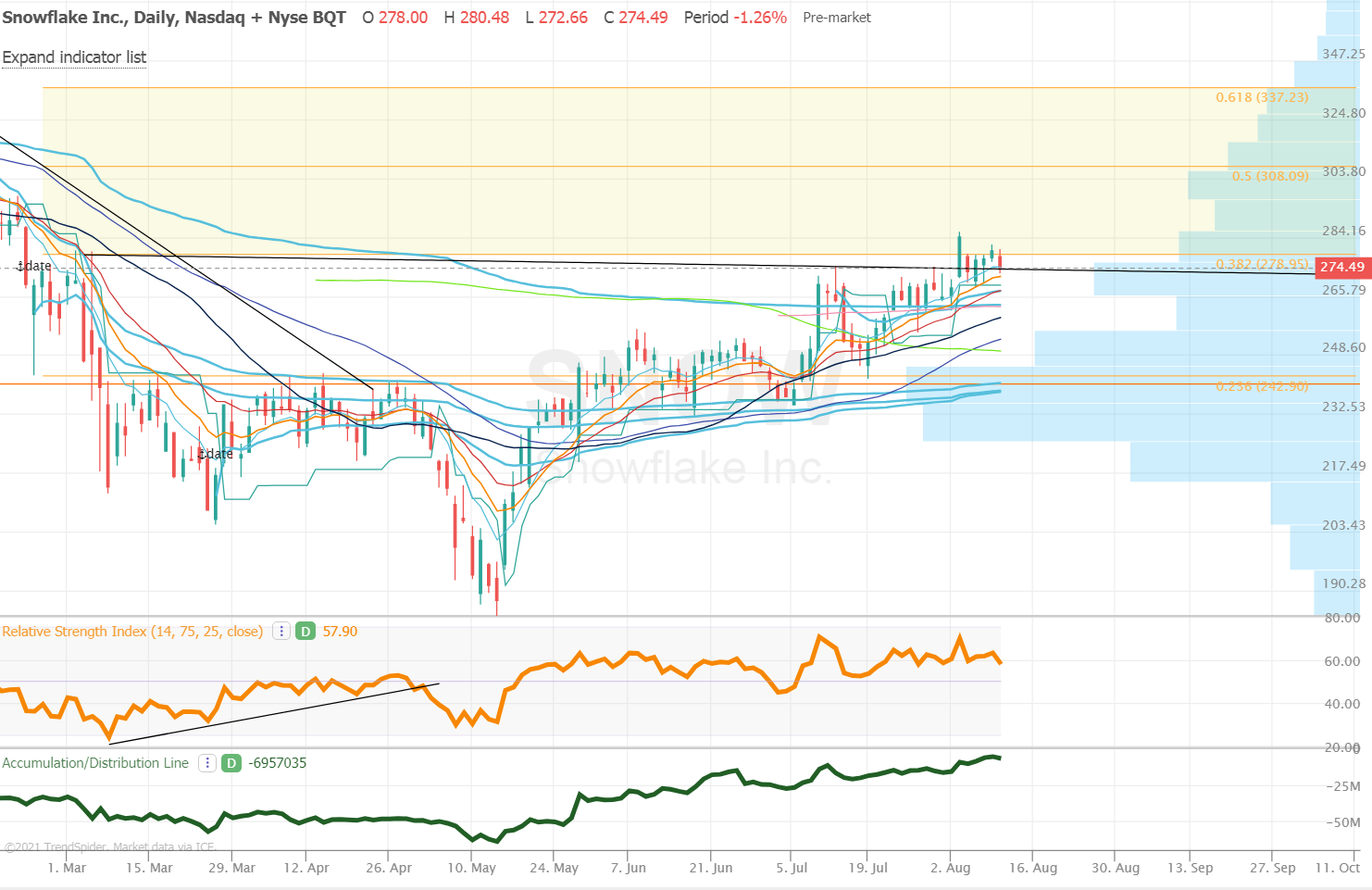 The advantage I see to applying this to stock/options trading is that although initially at the start of a trade the odds of winning/losing are 50/50 the further down the time-line you go the odds shift strongly in favor of positive returns, which is just a case of what markets historically do particularly in periods of rising earnings and this can be further improved by sticking to companies generating strong revenue/earnings growth with strong businesses.

In closing, I have not back-tested this nor given it a ton of thought but conceptually it makes sense to me and I see ways to improve odds with the end-goal being to turn some losers into winners while outweighing the opposing strategy of having hard stops which can often neutralize a potential winner before it starts making its move. I also see it being done consistently by large institutional traders who I believe have better access to quantitative data and testing of such a strategy. Also, something to keep in mind on why it is better on options trading than equity or gaming/betting, is that option returns are a lot different, asymmetrically positive with max loss 100% and max gain unlimited which may favor ability to not only get back to even, but gain from sticking to it

I would love to hear thoughts on this strategy and other potential enhancements to it for real-world application! I think studying other mathematical probability and game theory topics like Decision Tree, Game Theory, Prisoner’s Dilemma, and the Total Probability Rule are worthwhile for building your knowledge base as a trader and better understanding businesses as an investor.

I also came across this article and thought it was a solid discussion on this topic:

“The Martingale approach and averaging down” – Capital.com