Biogen (BIIB) shares jumped more than 50% on 6/7 as the FDA approved its Alzheimer’s drug Aducanumab in a surprise move, an event that was being watched closely in Biotech.

In April we noted that options sentiment was turning more positive and detailed the key June catalyst:

“Biogen (BIIB) options sentiment turning more positive the last week or so with 7500 April $280/$340 call spreads opening and 2000 June $375/$425 call spreads. BIIB also with 1250 May $300 calls bought for $1.3M on 3/22 and has 2000 July $380 short calls from 2/3. BIIB shares have started showing some strength this week nearing a move out of its tight YTD value range and back above key moving averages. A longer term chart shows a 7-year month triangle forming with MACD nearing a bull crossover and clearing $300 would be key on the volume profile. Biogen is a global biopharmaceutical company focused on discovering, developing and delivering worldwide innovative therapies for people living with serious neurological and neurodegenerative diseases as well as related therapeutic adjacencies. Its core growth areas include multiple sclerosis (MS) and neuroimmunology; Alzheimer’s disease and dementia; neuromuscular disorders, including spinal muscular atrophy (SMA) and amyotrophic lateral sclerosis (ALS); movement disorders, including Parkinson’s disease; ophthalmology; and neuropsychiatry. BIIB has also been expanding its successful Biosimilars portfolio. BIIB has a market cap of $42B and trades 13.7X Earnings, 3.1X Sales and 10X FCF with a strong balance sheet and struggling to generate much top-line growth as some core franchises erode and the company needs some pipeline success to return positive sentiment to investors. BIIB has a 6-7-2021 PDUFA for aducanumab, an anti-amyloid beta antibody candidate for the potential treatment of Alzheimer’s disease. BIIB has 9 mid-to-late stage readouts in 2021, a catalyst rich year. BIIB’s readout for Zuranolone from the company’s recent partnership with SAGE is another key event. BIIB is also involved in patent battles for Tecfidera/Vumerity versus generics and though seen as low probability, if it wins and restores its market position it would have a big impact. Analysts have an average target of $290 and short interest low at 2.6% of the float. Mizuho sees a $400 upside target on Alzheimer’s approval and $200 downside target and sees potential upside on the Gosuranemab catalyst that is seen as no value assigned to it currently. Citi sees Aducanumab approval at 50/50 at best. Hedge Fund ownership fell 3% in the latest quarter filings.”

In the month leading up to the decision we were highlighting a lot of bullish positioning as well: 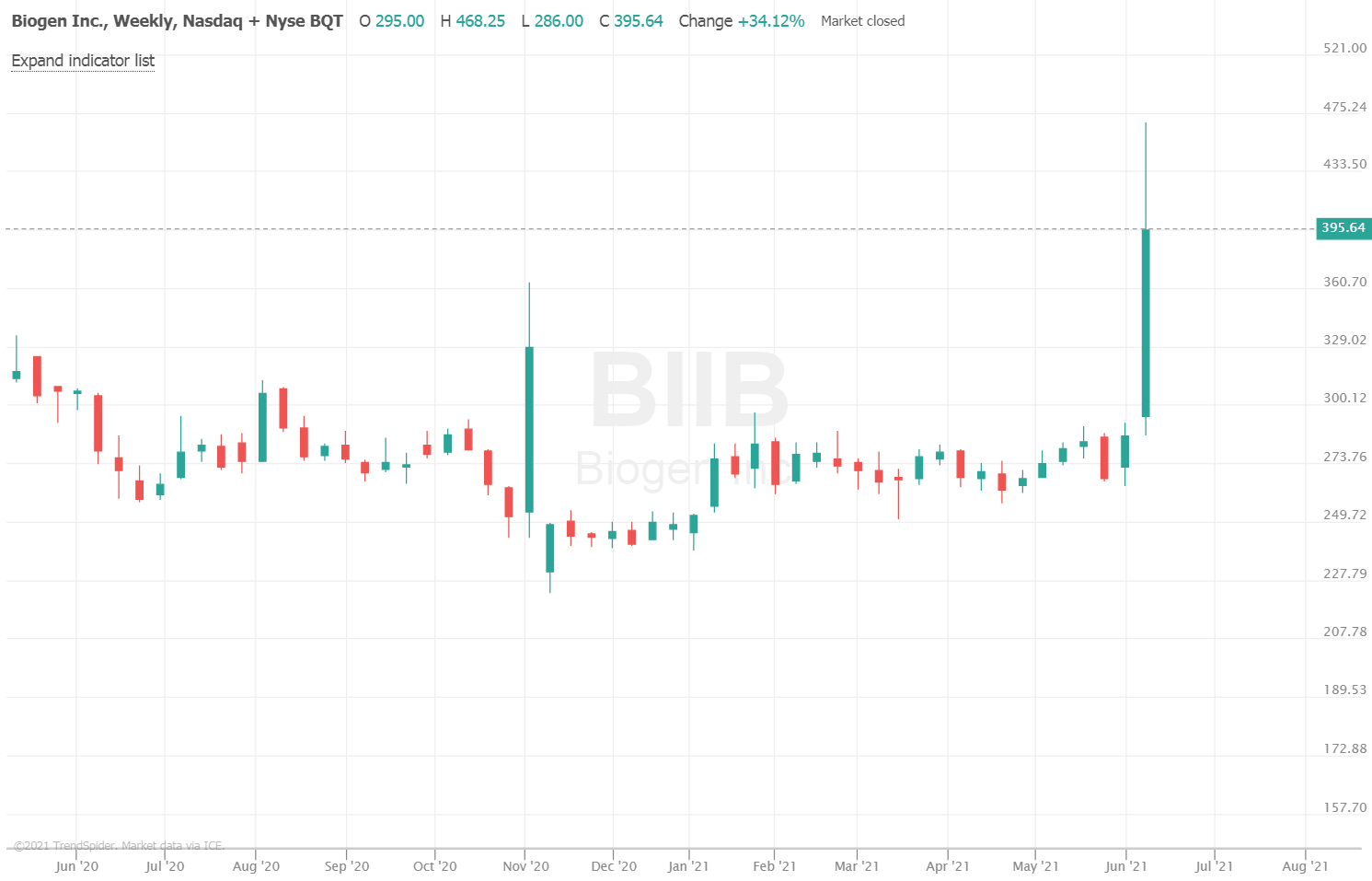