Nuance (NUAN) shares jumped 20% on 4/12 after Microsoft (MSFT) announced a $20B takeover adding to its AI and Healthcare markets. Nuance was a name seeing daily size call buying and it sure paid off well following the flows with millions in profits after the news.

We covered it many times at OptionsHawk the last few months:

“Nuance (NUAN) on 12/31 with 4000 August $45 calls unusually active and nearly all added to open interest with size buyers paying $5.40 to $6, so over $2M. NUAN previously with August $50 calls bought 1000X but otherwise limited notable open interest. NUAN shares gapped strong on earnings in November and have continued to trend higher with $50 a clear target out of this $40/$45 trading zone. The $12.5B software company is focused on Artificial Intelligence (AI) solutions for everyday work and life improvement. NUAN has an interesting opportunity to disrupt the Healthcare industry with its Nuance DAX solution to the physical and virtual exam room, its sophisticated conversational AI and ambient technology captures and contextualizes the patient encounter, which is then available in the EHR for the physician’s review and signature. NUAN has moved Dragon Medical One (DMO) to the cloud and is expanding addressable markets. NUAN estimated DMO penetration at 43% last quarter. NUAN is also winning deals in Retail and its breadth of solutions from security and biometrics to digital to conversational AI creates an attractive suite of solutions. NUAN currently trades 51X Earnings and 10X FY21 EV/Sales with revenues seen down 8.5% in 2021 though deceiving as it is a model transition name. Analysts have an average target of $43 and short interest at 8% of the float is up 20% Q/Q to a three-year high. Leerink raised its target to $47 on 12/7 citing top tier management, strong execution, favorable market positioning and a strong product suite to address challenges in the Healthcare system. Wedbush in November raised its target to $45 citing Healthcare Cloud as the star driving strong results and has multiple years of momentum ahead for DAX. NUAN also divested its HIM Transcription and HER Go-Live businesses which has been a drag on growth and margins. Hedge Fund ownership rose 7.9% in Q3 filings, Viking Global a top buyer along with Coatue, Lone Pine, and Melvin. “

“Nuance (NUAN) one of many growth names setting up in a nice inverted head-and-shoulders pattern after pulling back from 52-week highs in January. A move above $45.50 and back into February value has room up to $48.80 and the untested VPOC level. NUAN has seen some massive bull flow since the start of 2021 including buyers in the October $50 calls on 3/9, over 5000X, while the August $40 calls with over 12,000 in open interest.  The $12.33B company trades 33X cash and 10.3X EV/sales with accelerating top and bottom line growth. NUAN is coming off of a strong quarter with strong ARR performance and 28% growth in healthcare cloud revenue. They continue to make significant progress moving more of their base into Dragon Medical and their cloud-based Dragon Ambient Experience Solution.  NUAN sees a massive long-term opportunity in healthcare with their conversational AI and ambient technology changing the doctor-patient interaction and limited penetration so far. Short interest is 9% and rising since May 2020 when it was around 3%. Hedge fund ownership rose 5% in Q4, Coatue Management, Frontier Capital, and Melvin Capital all notable buyers. Sachem Head also added another 1.1M shares. Analysts have an average target for shares of $53 with a Street High $65. Wedbush adding to their Best Ideas list on 3/10, the firm believing the Dragon Medical Cloud healthcare opportunity is still in the early innings of playing out and remains a core part of the bull thesis on the name. They view Nuance as a core healthcare cloud play for the coming years given the next generation technology needs in healthcare in which it plays into with its ACI and AI powered strategic initiatives.”

And our Hawk Database is a valuable tool for staying on top of all notable open interest in a name: 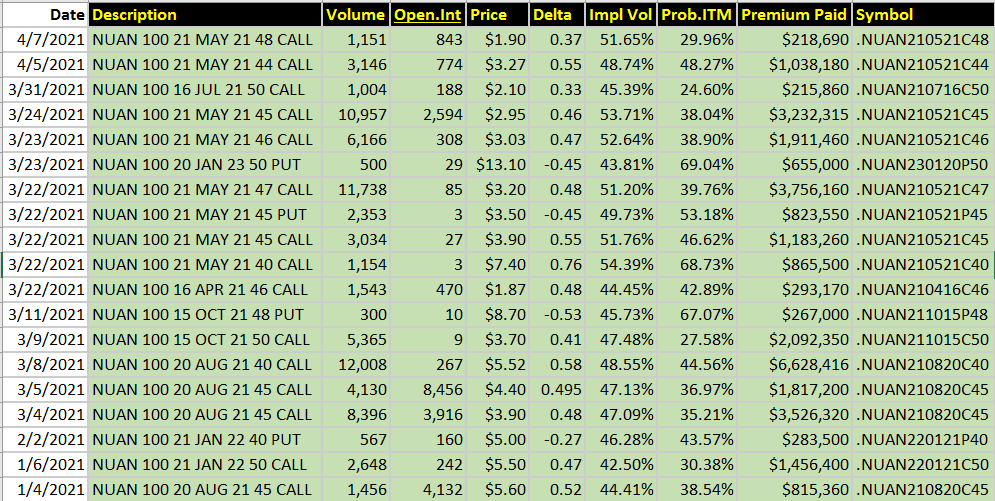 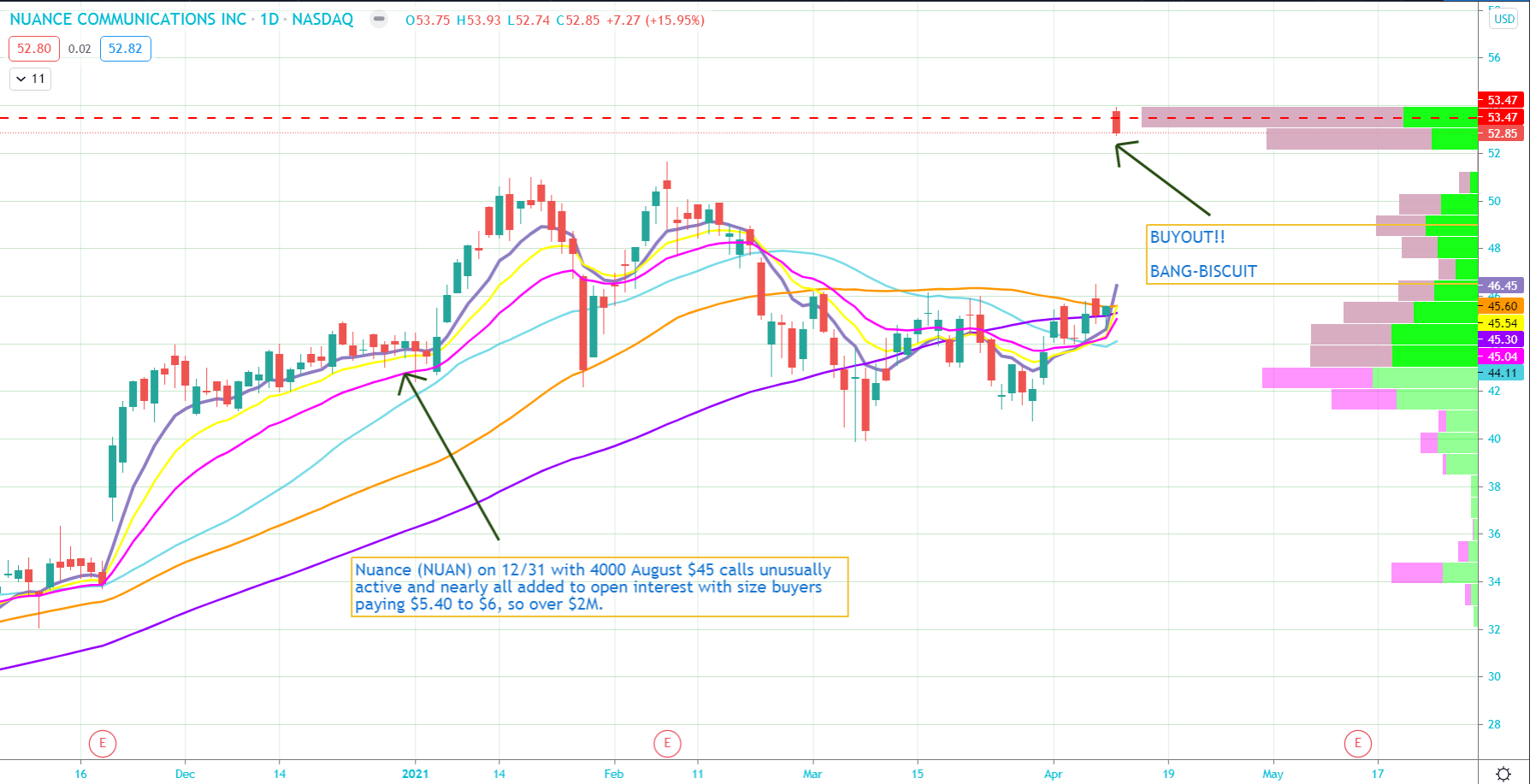